Fox News, and other right-wing media, sometimes make it very difficult to assess where they are coming from. Every now and then you have to sit back and try to figure out the answer to one simple question: Whose side they are on? 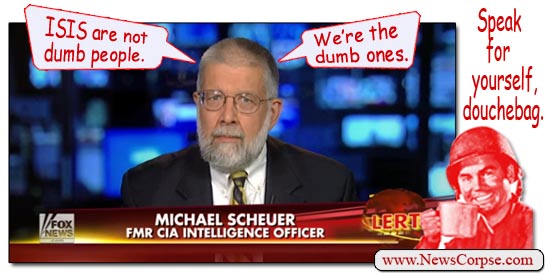 Case in point: Friday’s episode of Your World with Neil Cavuto featured a segment with former CIA “intelligence” officer, Michael Scheuer, a regular guest on the network. Scheuer is famous for telling Glenn Beck that “the only chance we have as a country right now is for Osama bin Laden to deploy and detonate a major weapon in the United States.” Isn’t that a charming display of patriotism?

Now Scheuer is providing his opinion of the intelligence of Americans as compared to our terrorist enemies. In his discussion with Cavotu, Scheuer complimented ISIS by saying that they were not “silly” enough to forgo the opportunity to infiltrate the United States by sneaking across the southern border. In fact, he elaborated on that praise saying that…

“The Islamists “are not dumb people. They may be brutal, but they are not dumb. We’re the dumb ones.”

Well then, that settles it. The problem we’ve been having all along is that we’re just not as smart as our adversaries. And Cavuto, notably, did not challenge that assessment. After all, how can a bunch of hillbillies who are hypnotized by reality television, designer jeans, and flame-broiled Whoppers supposed to be able to compete intellectually with such sophisticated and sociologically advanced opponents? Why did we not see this deficiency before Scheuer brought it to our attention? Oh yeah, because we’re stupid.

It’s unclear who Scheuer is referring to specifically. Does he mean that all Americans are dumb, or maybe our military commanders, or just our leaders? It’s hard to place the blame on the military since they have accomplished nearly every task assigned to them. In the past couple of weeks they have achieved repeated victories pushing ISIS back from cities they claimed to have captured. As for our leaders, the only one who permitted a catastrophic attack on U.S. soil was George W. Bush, and he’s been out of office for six years now. So that leaves just the American people to absorb the brunt of Scheuer’s insult.

In addition to Scheuer’s anti-patriotic stance, another right-wing hack has also contributed to the welfare of ISIS. James O’Keefe pulled off an idiotic stunt last month wherein he filmed himself crossing the Rio Grande in an Osama Bin Laden mask. That story is almost painfully funny, and can be read here. The news emanating from that buffoonery is that his antics are now being cited by ISIS to motivate wannabe terrorists to attempt similar crossings.

Fox News reported that a document obtained from the Texas Department of Public Safety warned that “militants are expressing an increased interest in the notion that they could clandestinely infiltrate the southwest border of US,” and that social media messages “alluded to a recent video by U.S. activist James O’Keefe, who was recorded coming across the Rio Grande valley in an Usama bin Laden costume.”

O’Keefe must be so proud that his little film project has become a source of inspiration to bloodthirsty terrorists. Of course if we needed an argument to refute Scheuer’s characterization of ISIS as being smarter than we are, there couldn’t be better proof of the fallacy of that notion than the fact that they are taking O’Keefe seriously. That’s evidence of a pretty severe intellectual shortfall. Do they really regard O’Keefe’s video as documentation of the state of U.S. border security? Is that really the best source they could scrape up? And if they are relying on that, then we don’t have much to worry about.

This is just further evidence that conservatives are itching for some sort of violent disaster to occur so they can blame it on our secretly Muslim president. They have been haranguing Obama about divulging our strategy to deal with ISIS, which would simultaneously reveal the strategy to ISIS themselves. And when they aren’t advocating tipping our hand, they are disparaging Obama and telling the world, and our enemies, that he is weak and incompetent. Which brings us back to the question that opened this article: Whose side are they on?

4 thoughts on “Fox News Intelligence Analyst: ISIS “Are Not Dumb People. We’re The Dumb Ones””