Never let it be said that the Republican war hawks ever underestimated the threats that America faces at all times. Despite the fact that we are the wealthiest nation in the world, with largest military, and a defense budget that dwarfs the rest of the planet (in fact, we currently spend more on defense than the next 8 countries combined), some Americans think that we should be in permanent panic mode. 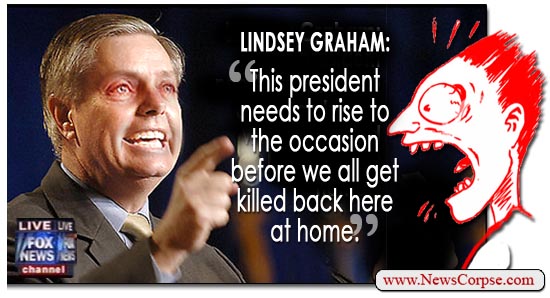 The Chairman of the Panic Caucus has got to be South Carolina Senator Lindsey Graham. This weekend he told John Roberts on Fox News Sunday that “This president needs to rise to the occasion before we all get killed back here at home.” That sober assessment can be illustrated by some examples of what would have to occur in order for that bloodcurdling outcome to be realized:

Of course, with all their money they could just buy Phillip Morris, whose tobacco products kill 400,000 Americans a year. That’s more than a hundred times the number of Americans killed by Osama Bin Laden. But at the current rate of cigarette sonsumption they would still have to wait about a thousand years for the victims to die off, and then assume that none of them procreate. The upside being that it would be perfectly legal and even profitable.

So Sen. Graham’s paranoia leads him to insist that President Obama “rise to the occasion” and do what exactly? Graham and his ilk say that we should put more “boots on the ground,” which ironically is just what ISIL wants us to do. They would then have more American targets on their battlefield and the prospect of more captives whom they could feature in future execution videos. These right-wing war mongers still can’t explain why that is a better option than having Iraqis and other regional soldiers carry the burden of policing their own neighborhood.

Here’s how Jon Stewart handled it on The Daily Show: