The hopelessly hysterical war hawks and fear mongers that populate Fox News seem to have no bar too low to slither under. Their primary mission is to lambaste President Obama no matter what he does. The President is in a perpetual no-win spiral of knee-jerk negativity from his robo-critics on the right.

Bolton: I have the sinking feeling, based on six years of performance, particularly the timing of this attack, last night had more to do for the President’s politics than for national security.

Setting aside the fact that it is still September, Bolton’s unfounded criticism comes after being one of those who complained that if action were not taken immediately it would be tantamount to dereliction of duty. So the President acts and all of sudden his action is denounced as political. In Bolton’s twisted view, any delay until after the November election would be treasonous, but any strike prior to it is electioneering. As noted above, the President cannot win with these nutcases.

However, the new standard for nauseating tirades was unleashed later in the day when an utterly deranged rant on the Sean Hannity program was delivered by Fox News strategic analyst, Ralph Peters (video below). The dripping bile in his painfully falsetto caterwauling was steaming with rancid hostility as he proposed that the United States emulate the ruthless brutality of our enemies. 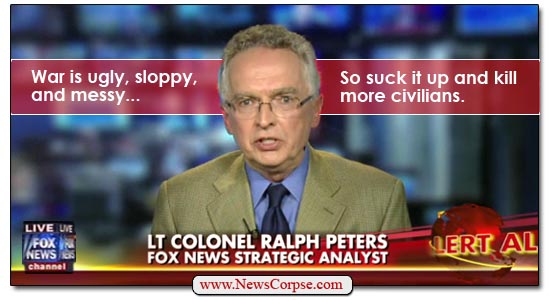 Peters: Another thing we’ve gotta get over. This nonsense about you can’t have any civilian casualties. War is ugly, sloppy, and messy, and sometimes there are civilian casualties, especially when your enemy uses human shields. If you’re gonna go after ISIS you gotta suck it up and do what’s right. And by the way, civilian casualties? Look what ISIS is doing and it’s actually gaining them recruits as they slaughter civilians.

There you have it. If ISIS can attract new recruits by slaughtering civilians, then why shouldn’t America do it? After all, we are seeking the same sort of psychologically demented murderers that ISIS is, and leaving a trail civilian corpses throughout Syria and the Middle East would only endear us to the regional population. Right?

This isn’t the first time that Peters has suggested something so inhumane and contrary to American values. He has advocated for letting terrorists murder American soldiers (Bowe Bergdahl). He accused Obama of seeking common ground with terrorists. Indeed, on last night’s Hannity he asserted that the airstrikes in Syria were “designed to limit terrorist casualties.” But his repeated advocacy of what amounts to international war crimes is what sets him apart from your run of the mill wingnut. Here are a few quotes from Peters:

“We must dispose of one last mantra that has been too broadly and uncritically accepted: the nonsense that, if we win by fighting as fiercely as our enemies, we will ‘become just like them.'”

“Sometimes a heavy hand and brutality works. [The Russians] don’t do stop-and-frisk, they do stop-and-frisk and beat the hell out of you. And you know what? It’s brutal, it’s ugly, and sometimes it works.”

[In calling for attacks on the media] “Rejecting the god of their fathers, the neo-pagans who dominate the media serve as lackeys at the terrorists’ bloody altar.”

Pair this with the idiocy of Bill O’Reilly’s recent plan to build an army of mercenaries to combat terrorists around the world, because what could be better than legions of paid fighters with no loyalty to anything but their paycheck? And of course, their moral standards would be out of our control. O’Reilly seems to think these sort of characters would be immune to accepting a higher bid for their services and turning on their American bosses. He also rejected the criticisms of military experts on his own program who called the idea “ridiculous.” Even his pal Charles Krauthammer couldn’t dissuade him from his crackpot theory.

The tendency of right-wingers with undisguised blood-lust to tolerate, and even advocate, barbarism and criminal atrocity exposes them for the heathens they are. They want to turn America’s sons and daughters in the armed forces into savages and then expect them to come home and live normal lives. And they believe that by acting like terrorists, America can eradicate terrorism. That’s how irreparably delusional they are. It is more than wrong, it is dangerous. And it doesn’t belong in the discourse of a civilized society.