The Ebola mania continues in the media as the White House announces the appointment of an Ebola response coordinator. Ron Klain, who served as chief of staff to both Vice President Biden and former vice president Al Gore was chosen for his managerial skills to assume a purely administrative role. No sooner was the announcement made than Republican pundits and politicians piled on to criticize the move.

At this point, anyone who takes criticism from the right seriously has an acute deficiency of mental capability. President Obama’s opponents are so notoriously kneejerky that whatever they say has lost all meaning. Recall that they spent months during the President’s first term deriding his advisers as “czars,” comparing them to Soviet apparatchiks, and demanding that they be dismissed. Then the Ebola situation occurs and the same folks demand the immediate appointment of a czar. But after Obama agrees with them and appoints one, they grumble that he chose the wrong guy. This is further evidence that there is nothing that Obama can do that will satisfy these trolls.

While at the Fox News asylum, the inmates have taken over. The naming of Klain was belittled as a political gesture and Klain himself was said to be unqualified. But the people making these assessments were themselves lacking in any credentials on either public health, infectious diseases, or government administration. Take for example the “Power Panel” assembled on The Real Story with former Miss America turned Fox News anchor, Gretchen Carlson. 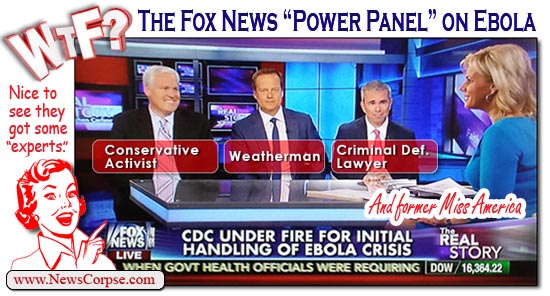 The panel called upon to grade the President’s performance consisted of Matt Schlapp, a right-wing activist and chairman of the American Conservative Union, Rick Reichmuth, a Fox News weatherman, and Philip Segal, a criminal defense lawyer. Not a single one of them had any experience with public health, infectious diseases, or government administration. Yet they were somehow qualified to pass judgment on Obama and Klain. And this was not some random group of talking heads who simply wanted to express their opinions. This was the “Power Panel.”

The panel began on a hilariously ironic note when Schlapp tried to raise the anxiety level by saying that the CDC “has shown incompetence” and that he would “move from being alarmed to being scared.” Then he laid into the czar question saying that “Now we’ve picked a czar over this who is more a political spinner than a health expert.” Remember, this is coming from a professional political spinner. The lawyer didn’t contribute much more to the discussion.

Surprisingly, Reichmuth the weatherman made the most cogent remarks, reminding the panel not to over hype the “crisis,” and that not responding to AiDS in a timely manner in the eighties led to a real tragedy. Reichmuth didn’t venture further on that subject, but we know that it was Ronald Reagan who said nothing about AIDS until after some 20,000 people had died. Contrast that with the current “outbreak” where there has been only one fatality in the U.S.

Fox News has been decidedly negative about every aspect of the administration’s response to Ebola. They opposed the czar. They opposed sending troops to West Africa. They opposed bringing infected Americans back home for treatment. The only measures they advocate are those that seal the United States off from the rest of the world in a continental haz-mat suit that prevents travel and border crossings. Never mind that actual experts dismiss those ideas as being ineffective and even counterproductive.

All of this panic over an epidemic that has never materialized has drawn attention away from the midterm elections. But the idiotic rhetoric, fear mongering, and other ill-informed blathering by the right should serve as a reminder of the real importance in voting on November 4th. If the Republicans gain more control over our government, we can expect a couple of things that would be truly disastrous. First, they would initiate impeachment proceedings for Obama over Benghazi or health care or gay marriage or something something Kenyan something Muslim something. And secondly, they would contract an exterminator to tent the entire nation and fumigate to rid it of pests whom they define as Democrats, liberals, minorities, non-Christians, and women who don’t know their place.

They are praying that you don’t vote. And when they aren’t praying they are passing legislation to make it harder for you to do so. Don’t let them succeed. There are more of us then there are of them. If we vote, we win. So vote and make sure everyone you know votes. Well, except for your lost friends and family who still listen to Rush Limbaugh and watch Fox News.

6 thoughts on “Debating The Ebola Czar: The Fox News “Power Panel” Of Dunces”