America’s politicians and pundits are engaged in a bitter debate over what to do about the Ebola non-crisis. One of the most fervently argued issues is whether or not to implement a travel ban against countries that are having a problem with Ebola. 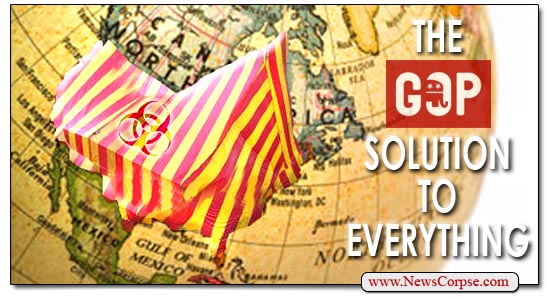 Let’s set aside for the moment that the United States is one of those countries, and that conservatives believe that because of our allegedly incompetent president, porous borders, and lax security, it is just going to get worse. So you’d have to ask if the the wingnuts want a travel ban on America.

The remaining arguments center on what benefits and harm will result from a ban on travel. Right-wing politicos have lined up on the side of a ban arguing that it would keep infected persons out of the U.S. On the other side are doctors, scientists, and other public health experts who assert that a ban would serve no purpose because people could still travel to places without a ban and continue on from there to the U.S. In the process they would have slipped though existing monitoring and tracking procedures. In addition, a ban would present an obstacle to the flow of doctors and supplies to the areas that need them most.

What I haven’t seen in any discussion on this topic is a straightforward, unbiased look at the relevant statistics associated with a travel ban. So here is what we are really talking about.

First of all, there is already a de facto ban due to the fact that there are no direct flights on U.S. carriers from the affected West African countries to the United States. However, travelers originating from those countries do arrive here via connections in other countries. The total is estimated to be about 150 per day.

The first (and only) infected West African to arrive in the U.S. was Thomas Eric Duncan. He was a Liberian who began his travel on September 19, without noticeable symptoms. He later became ill and eventually died in a Dallas hospital.

It’s difficult to pinpoint when the risk for Ebola-infected travelers began. So let’s just begin counting on the day that Duncan arrived in the U.S. From then it has been 28 days. With 150 travelers from the affected West African countries arriving every day for 28 days, there have been 4,200 people arriving here from the troubled region. And out of that 4,200 people there has been one – that’s ONE – who became ill with Ebola. That’s 0.0024% of the travelers from West Africa. And for that Republicans and wingnut pundits want to impose a total ban on travel that experts insist will make matters worse.

Three other people with Ebola (all Americans) came home to the U.S. for treatment. They all survived, and no one at any of the hospitals where they were treated became ill. The only transmissions (two so far) occurred at the Texas Health Presbyterian Hospital that treated Duncan.

10 thoughts on “How Effective Would A Travel Ban Be Against Countries With Ebola?”