Whenever two of America’s most delusional alarmists get together to fan irrational panic, you know the combination is going to produce fireworks. That’s what happened Wednesday night on the O’Reilly Factor when Bill O’Reilly (who thinks the CDC chief is a lying propagandist who should resign) hosted Glenn Beck (who is Glenn Beck). 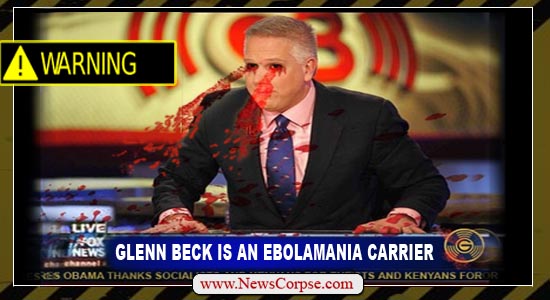 In this soon-to-be classic episode, Beck erroneously says about Ebola that “With every single person that gets it, it mutates and it changes. Danger.” That claim must have come directly from the “Pundit’s Butt Reference,” which Beck keeps conveniently on his office chair. Then he continues, making the ludicrous assertion that the recent stock decline was the result of “two people in the hospital right now with Ebola,” ignoring the actual causes: the weak economies in Asia and Europe, an anticipated “correction” following one of the longest bull markets in history, and routine profit-taking. O’Reilly never refuted any of Beck’s nonsense.

As if this wasn’t enough idiotic speculation and misinformation, Beck was just getting warmed up. He still had a thoroughly insane conspiracy theory up his sleeve that he was waiting for just the right moment reveal. And when that moment came, Beck said…

“If this were happening in Washington, D.C. right now do you think the president and his administration would be acting like this? Do you think that Congress would be acting like this? This is happening in Dallas, Texas. This is a top ten city in the United States of America. Happens to be one that doesn’t particularly care for the President all that much and his policies. One that the President has not been too favorable on. We are already being squeezed on our southern border. Now we’re being squeezed on Ebola. Is there an agenda here?”

Good question, Glenn. Obviously President Obama’s agenda centers around the fact that he hates Dallas so much that he arranged to have an Ebola-infected Liberian fly there and die. In the process, Obama’s plot somehow made sure that two of the nurses attending the patient were also infected. How Obama managed to accomplish all of this is a greater mystery than how Bigfoot shot Kennedy and escaped to the moon on the alleged “landing.”

Unfortunately for Beck, his theory falls apart when facts are brought into the conversation (which never occurred on the O’Reilly show). First and foremost, it is not true that Dallas “doesn’t particularly care for the President.” In 2012 Obama was reelected with 57% of the vote from Dallas County. That’s a larger margin than he won nationally. Obama also beat McCain in Dallas by the same amount in 2008. What’s more, the current mayor of Dallas is Mike Rawlings, a Democrat. These facts make it difficult for Beck to peddle his theory based on Obama’s alleged vendetta against the city.

Like all of Beck’s theories, this one is rooted in falsehoods mixed with deranged fantasies and never approaches any sense of plausibility. They are merely vehicles for him to spread fear and panic among his gullible disciples, which translate into dollars thrown into his collection plate by desperate waifs who believe that he will save them. And Fox News cooperatively provides him a platform to advance his apocalyptic vision to a broader, but still dimwitted, audience.