A new entry on Sarah Palin’s Facebook page reaches back in time to reprise her famously idiotic allegation about President Obama allegedly “palling around with terrorists.” In the original instance, Palin was referring to Obama having a close relationship with former Weather Underground activist Bill Ayres. Of course, that was a lie, but lying has never been an impediment to Palin’s obsession with smearing, and even impeaching, Obama. 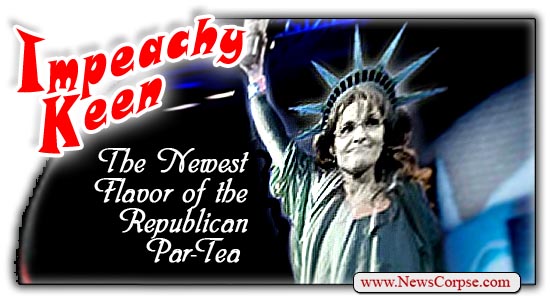 The new incarnation of the terrorist pals meme is Palin’s way of denouncing recent reports that Obama wrote a letter to Iran’s Ayatollah Khameini seeking to ascertain Iran’s position on battling ISIL. The White House stated unequivocally that there was no military coordination between the U.S. and Iran, but there are obviously some shared objectives.

Palin’s first glaring exhibition of ignorance pops up in the very first sentence of her post:

“Good God, Mr. President. To partner with Iran is to trust the enemy, which is insane. Iran has complicity in the rise of ISIS as it supports radical militias and arms Islamic terrorists.”

Good God, indeed. Where Palin gets the notion that there is any hint of a partnership with Iran is as mysterious as her ability to spy Vladimir Putin’s head rearing up on the Alaskan horizon. But more importantly, Palin seems not to know that Iran isn’t only not complicit with ISIL, they are avowed enemies. ISIL is a Sunni Muslim operation that has massacred Shia Muslims in Iraq and Syria, and Iran is a Shiite nation. In fact, Iran has already been engaged in battle with ISIL and has been aiding the Iraqis in the war effort. For Obama to communicate with the Iranians on this matter is both good policy and necessary to proceed with a fully informed strategy.

But Palin wasn’t satisfied with merely getting the most fundamental facts wrong, she had to continue in her screed to criticize Obama for…

“…his willingness to negotiate with terrorists” and for “pulling an anti-Reagan move by taking our Big Stick of strength and putting it in the hands of any foe.”

Huh? What on Earth is running through her cartoon brain? First of all, there have been no negotiations between the U.S. and Iran. Secondly, what “anti_Reagan move” is she talking about? Could it be the time that Reagan actually did negotiate with the terrorists in Iran who were holding Americans hostage? Could she be referring to Reagan’s scheme to sell arms to our Iranian foes in violation of an international arms embargo against Iran? And what “Big Stick of strength” is being put into the hands of our foes? Maybe she is mis-remembering how Reagan used the ill-gotten funds from his illegal arms sales to Iran to illegally bankroll the terrorist Nicaraguan Contra rebels.

It’s bad enough that Palin gets so much wrong about her idol Ronnie, but somehow at the conclusion of this stream of dipshittery, Palin finds a way to accuse Obama of “coming against Israel” and alluding to America’s inability to survive.

It is delusional tripe like this that may be responsible for Palin’s new SarahPalinChannel on the InterTubes to be failing so miserably. Aside from the fact that she barely posts anything on it, the Daily Beast reports that the traffic is, shall we say, disappointing with “a barely measurable 36,000 visitors in September.” For contrast, News Corpse gets more traffic than that. Imagine how embarrassing it must be for a nationally known Tea Party icon, GOP VP candidate, and Fox News contributor, to get trounced by this humble blog? Oh, the humanity…