For the past few weeks Fox News has been ratcheting up the racial content of their tabloid fare. Megyn Kelly’s obsession with a trumped up story about the New Black Panther Party and their dozen or so members is a perfect example of the race-baiting that Fox passes off as journalism. They follow that up with the promotion of an Andrew Breitbart video that was blatantly edited to tar USDA employee Shirley Sherrod as a racist even though the opposite was evident when the video was viewed in its entirety. 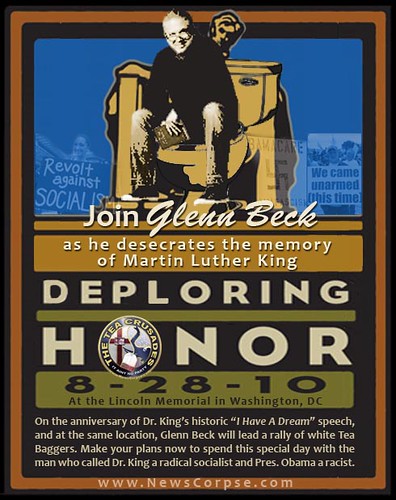 But these recent events are not aberrations. They are representative of an agenda that cannot be anything but deliberate. Recall Fox’s use of offensive rhetoric with reference to President Obama and his family like “terrorist fist jab” and “Obama’s baby mama.” Then there was the time that Bill O’Reilly tried to explain his reluctance to be critical of the First Lady by saying that he didn’t “want to go on a lynching party.” Or the time he attempted to praise patrons of Sylvia’s Restaurant in Harlem by noting that they didn’t shout for their “mother-fucking iced teas.” And who could forget Glenn Beck calling Obama a racist with a deep-seated hatred for white people? Beck is escalating his racial insensitivity by holding his self-glorifying rally in DC on the anniversary of Martin Luther King’s “I Have a Dream” speech next month.

Some people might wonder why Fox News would risk alienating a potentially significant portion of their audience. Well, we have the answer now. According to Brian Stelter of the New York Times, the African-American segment of viewers of Fox News in primetime this season is only 1.38%. That compares to 19.3% for MSNBC, and 20.7% for CNN, numbers that are much closer to the 14% of African-Americans in the population at large. These numbers also suggest that the black audience that might have been watching Fox have split evenly between MSNBC and CNN causing those networks to be over-weighted by about 6% each.

It is apparent that Fox News has little to lose by offending a segment of the television universe that doesn’t watch their programs anyway. Combine that with Fox’s political incentive to suppress Democratic votes and the strategy of inflaming racial animus doesn’t seem so bad in their warped perspective.

At the very least this explains why Fox persists in airing obviously offensive stories and why they think they can get away with it without adverse consequences. They have nothing to lose in financial terms, and much to gain by pandering to a prejudice demographic. It may be reprehensible to decent folks, but to Fox it’s just good business, and more importantly, good politics.

9 thoughts on “Why Fox News Is Racist”