The biggest news for the past few days in the conservative media noise machine has been the remarks of Jonathan Gruber, an M.I.T. economics professor who consulted on the drafting of the Affordable Care Act. Some enterprising wingnut found an old video where Gruber was caught making some extemporaneous, impolitic comments about the passage of the legislation. What he said was that…

“This bill was written in a tortured way to make sure the CBO [Congressional Budget Office] did not score the mandate as taxes. If CBO scored the mandate as taxes, the bill dies. So it’s written to do that. In terms of risk-rated subsidies, in a law that said healthy people are gonna pay in – if it made explicit that healthy people are gonna pay in, sick people get money – it would not have passed. Lack of transparency is a huge political advantage. And basically, call it the stupidity of the American voter or whatever, but basically that was really, really critical to get anything to pass.”

There is no question that such language is damning and an irresistible lure for Republicans salivating at any opportunity to discredit the program and its authors. The problem with the subsequent and expected outcry by the right is that they have entirely misrepresented both the facts and Gruber’s role. 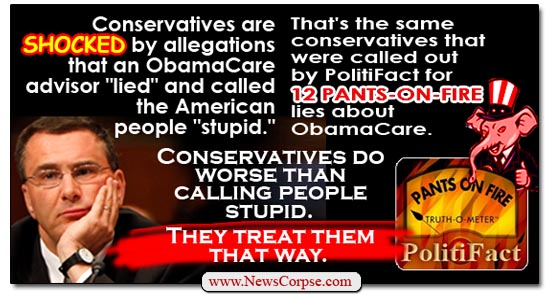 Contrary to the incessant mantra, Gruber was not the “architect” of ObamaCare. He was one of many consultants to the White House and he served in the same position when Mitt Romney implemented an almost identical bill in Massachusetts. And while his words were poorly chosen, his meaning was not particularly controversial. He was merely pointing out the difficulty of persuading people who often have conflicting interests in enhanced services but an aversion to collecting the revenue necessary to pay for them.

As a result, politicians on both sides dance around the issue of taxes and benefits in order to make successful arguments. And yes, they sometimes are less than completely truthful. And yes, there are Americans who cannot process the complexities of large-scale economic programs and tax policy. So people like Gruber get frustrated by the mindset that demands cheap health insurance, but refuses to consider methods of paying for it. Then he makes ill-considered comments in a public forum stemming from that frustration that give his ideological opponents ammunition to use against him and the policy.

However, when you hear conservatives whine about President Obama or Democrats being untruthful, it is necessary to put their complaints into perspective. For most of the debate surrounding health care, the right has been brazenly dishonest. And their falsehoods were not merely verbal gaffes or misinterpretations. They were outright lies made up from thin air. When scored by PolitiFact there were at least twelve instances where conservatives received “Pants-On-Fire” designations for their patently absurd contentions, as illustrated in this handy infographic.

Anyone with a on open mind who researches these blatant distortions of reality will surely recognize that Gruber’s offense is far less significant than those of the right-wing Fib Factory. Particularly when you factor in that Gruber is not a spokesman for the administration or for Democrats in Congress. However, the lies by opponents of ObamaCare often came from the Republican leaders and banner carriers for their cause. That includes Fox News who is currently burning up their airwaves with condemnations of Gruber and, by extension, ObamaCare. On the Fox News community website, Fox Nation, they posted fourteen articles in one day on this subject. 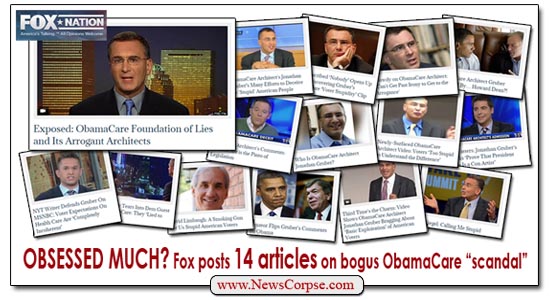 For more examples of Fox lies…
Get Fox Nation vs. Reality. Available now at Amazon.

It is clear that Fox has an activist agenda that is closely aligned with that of the Republican Party. And it is equally clear that they would rather flood the zone with trivialities than to engage in an honest debate about real issues. They are afraid to address the harsh realities that people face when denied access to quality, affordable health care. They would never acknowledge the people who have found renewed hope for themselves and their families since ObamaCare launched. Take for instance this example of a skeptical Republican whose mind was changed when he eventually looked at the facts. It’s just one example of untold thousands that proves that proves that there are things worse than calling people stupid. And that’s treating them that way.