A little known website with no reputation or credibility recently published a story that purported to reveal a shocking abuse of the American people’s treasury. The headline from the “American News” wailed that “Congress Approves Bill Offering Free Cars To Welfare Recipients.”

Goodness me. That won’t do at all. What’s wrong with those dippy congress critters?

As it turns out, there may be plenty wrong with our representatives in Washington, but giving cars away to welfare recipients isn’t one of them. The article was originally published by the openly satirical website Empire News. American News picked it up without attribution and tens of thousands of conservative blockheads thrust it into viral status. The article said in part that…

“Recently, the White House announced a plan to offer free vehicles to welfare recipients. According to reports, the bill passed in a narrow vote. The program was initiated by President Barack Obama, and in many way mirrors what has become known as ‘The Obama Phone’, or the program through which welfare recipients can get free cell phone service. […] This free vehicle assistance program is designed to change the way Americans are currently living. The President will sign the bill later this week, and the planning will be put into motion.”

For the record, the Obama Phone affair was another fabrication of the rightist Fib Factory that distorted the real purpose of the program and then sought to blame Obama for the invented travesty, while neglecting to disclose that the program began under Ronald Reagan.

The American News story was reviewed by PolitiFact who declared it a Pants-On-Fire lie. However, this isn’t the first time the ObamaCars nonsense surfaced in the wingnut world. In June of 2013 the Kurvy Kouch Potatoes of Fox & Friends displayed their crack journalistic skills by reporting on an outrageous breach of the public trust. Here is an excerpt from my article at the time: 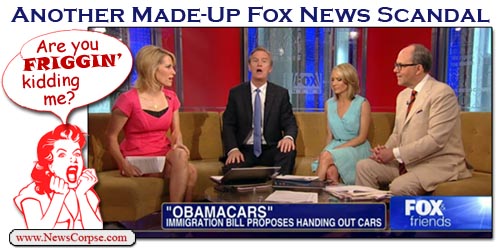 “On Fox & Friends, the curvy couch potatoes were joined by radio shrew Laura Ingraham, Bush’s former press secretary, Dana Perino, and Rupert Murdoch’s personal lawyer, Peter Johnson, Jr. (the man with three names that are all synonyms for penis). In the course of their conversation they introduced a budding scandalette that they clearly believe will rip the heart out of their beastly foe in the White House.

“What the Foxies are alleging is that, in the words of Steve Doocy, “there’s a provision in the Immigration bill that could be used to give free cars, motorcycles, scooters, and other vehicles, to young people.” Oh my. That would troubling – if there were even a scintilla of truth to it which, of course, there is not. This laughably ridiculous claim seems to have originated at the Official Birthplace of Laughably Ridiculous Claims, Breitbart News, where they extrapolated a nonsensical analysis of an amendment attached to the bill to allocate funding for youth job programs. The language that Breitbart and Fox found so offensive simply described that the funds were to be used … [for busfare] (Continue reading this article here)

Back in 2013 PolitiFact also analyzed the Breitbart article and gave it a Pants-On-Fire rating as well. Fox News, in keeping with their no-apologies corporate doctrine never acknowledged or corrected their erroneous reporting. And since the psychotic wingnut brigades are reluctant to ever let any phony scandal fade into the obscurity it deserves, the ObamaCar business is once again hitting the streets. It can join the recently resurrected ObamaCare Death Panels, and look for the currently out-of-favor Ebola and Benghazi freakouts to regain momentum soon.