Ever since the civil rights movement began in the United States, white politicians and pundits have arrogantly imposed their judgment on the legitimacy of the advocates and activists fighting on behalf of African-Americans. Whether it was Martin Luther King, Jr., Malcolm X, Huey Newton, Jesse Jackson, Medgar Evers, Nelson Mandela, Al Sharpton, they hated them all. There were concerted efforts to discredit them and to limit their influence.

Suffice to say that conservative bigots will never be satisfied with any spokesman for racial equality. And the ones they hate most will be the ones who are most effective. It is therefore necessary, from their perspective, to belittle not just individuals, but entire movements. 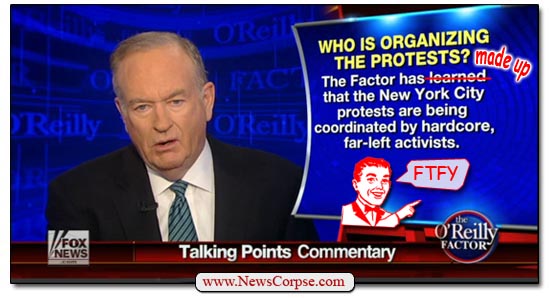 Case in point: This week Bill O’Reilly sought to generously bestow his wise council on the naive and misled protesters filling the streets after the tragic killings of unarmed black men in Ferguson, Missouri and New York. According to O’Reilly these anguished citizens were nothing but dupes to an orchestrated cabal of self-serving social disruptors. His Talking Points segment was titled “Who is organizing the racial protests breaking out across America?” And who would be better qualified to answer that question than Bill O’Reilly?

In short, O’Reilly deprecated the protesters as “a group of professional agitators who use social media to organize street confrontations.” He asserted that the marchers were plants controlled by a few rabble-rousers with fanciful names like “This Stops Today,” “Hoodies for Justice,” and “Communities United for Police Reform.”

O’Reilly: The demonstrations you are seeing are not – ARE NOT – spontaneous dissent from regular folks. Rather they are well-planned disruptions from professional anti-establishment provocateurs. […] As soon as the Garner grand jury decision was announced social media messages were blasted instantly with hashtags like #ICantBreathe and #BlackLivesMatter.

There you have it. The fact that people began to quickly communicate their displeasure at having seen an obvious miscarriage of justice is proof that the whole endeavor was a fraud. It is impossible for “regular folk” to express themselves and join like-minded people in public demonstrations of anger and grief. So obviously it was orchestrated by alliances of evildoers who, as O’Reilly said, were “designed to create chaos.”

If it weren’t enough for O’Reilly to smear the protesters with malicious intentions, he invented straw man allegations that he could righteously shoot down. For instance, he said that “The claim that American police are hunting down young black men is a lie.” Of course it is. But it is only O’Reilly who ever made that claim. No one protesting the recent killings by police officers ever suggested that their victims were hunted down. The problem is that the victims’ rights were ignored, as was the administration of justice following the tragic events. Nevertheless, O’Reilly went on to slander the protesters as being the stooges for outside agitators.

O’Reilly: The Factor has learned that the SEIU labor union is deeply involved in the protests, as are a number of other groups funded by the shadowy radical George Soros.

O’Reilly never explains how he learned of these nefarious associations or offered any proof of it. In all likelihood he just assumed that two of his favorite targets for derision were responsible because, well, why not? In O’Reilly’s view American workers are always trying to destroy the country, and Soros is behind every evil, progressive occurrence in the world anyway.

In the course of his lecture, O’Reilly engaged in the dissemination of falsehoods that has become his hallmark. He backed up his contention that the police are innocent victims of scandalous attacks by citing faulty data about the shooting deaths of blacks and whites by police. However, his allegatins were soundly refuted by PolitiFact, who examined the issue in detail.

No matter how much he wants it, Bill O’Reilly can never be the authority who decides which civil rights leaders are legitimate. And he cannot be taken seriously when he makes blanket declarations that tens of thousands of people of all races who pour into the streets to protest injustice, are merely pawns of some imaginary conspiracy of anarchists. His arrogance is staining the admirable actions of concerned citizens who seek to make manifest the ideals articulated in the preamble to the United States Constitution: “To form a more perfect Union.” But then, maybe the word “union” threw him and he’s afraid the Founders were working with SEIU and George Soros.