Conservative zealots have been in a quandary over what to make of the police officer who choked Eric Garner to death on video. They don’t want to be seen as agreeing with the liberals they so feverishly despise, but they can’t find a reasonable argument to justify the unambiguously brutal killing of a man caught committing a crime on the scale of jaywalking. And unlike the police shooting in Ferguson, Missouri, there is video evidence of the officer’s brutality. 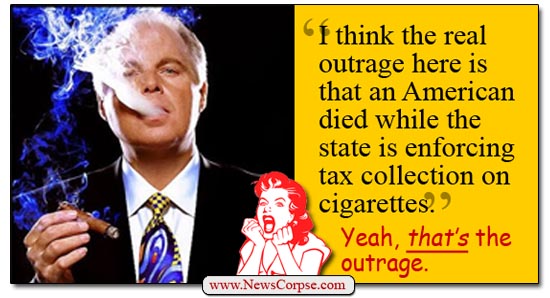 With the passage of time some of these right-wingers have begun to settle on a debate strategy that absolves the police of any guilt. It was first articulated by Sen. Rand Paul from the tobacco-growing state of Kentucky. Fox News hosts Sean Hannity and Greg Gutfeld joined the fruitcake choir. Shortly thereafter, Rush Limbaugh picked up the baton and ran a bit farther around the track. Here is what they said:

Paul: I think it’s also important to know that some politician put a tax of $5.85 on a pack of cigarettes […] For someone to die over breaking that law, there really is no excuse for it. But I do blame the politicians.

Limbaugh: The police in New York, because they’re so eager for tax collection, what is being done here with regard to taxes and the state’s desire to collect them no matter what […] I think the real outrage here is that an American died while the state is enforcing tax collection on cigarettes.

Let’s get one thing straight here: Eric Garner did not die for anything related to tax collection. He was murdered by a police officer who strangled him while ignoring his repeated cries that he could not breathe.

Furthermore, Garner was never alleged to have violated any tax laws. The fact that the police originally approached him regarding his allegedly selling single cigarettes was incidental to his death. Selling “loosies” is not a violation of any tax code. It is a violation of statutes that prohibit the unlicensed sales of controlled substances. Garner would have been subject to the same legal scrutiny had he been selling single shots of whiskey.

There is only one cause that can be cited for Garner’s death, and that is the excessive force and reckless endangerment by the officer that placed him in a chokehold, a tactic that was explicitly prohibited by the guidelines of the NYPD.

For anyone to shift the blame from the overzealous officer to the legal pretext for the arrest is patently absurd. This is just an opportunity for anti-tax extremists to exploit a tragedy to advance their agenda and simultaneously excuse the behavior of a rogue cop. If Garner had been stopped for allegedly shoplifting a pair of socks from a Wal-Mart, and subsequently died at the hands of the police, would any of these wacko Libertarians be arguing that the laws against shoplifting caused the death and that those laws should be repealed?

It takes a special kind of stupid to advance a theory that a minor legal infraction somehow compelled a police officer to use deadly force against a suspect. That behavior is not supported by any statute or the code of conduct of the police department. It was solely the decision of the officer.

The proponents of this theory, however, may have ulterior motives. First of all, they are desperate to avoid agreeing with their ideological adversaries that the police might be responsible for having overreacted. Secondly, they don’t want to allow legitimate charges of racism to settle in despite the evidence that black men are 21 times more likely to be shot by the police than white men. And finally, both Paul and Limbaugh have personal conflicts of interest. Paul represents the second biggest tobacco producing state in the country. And Limbaugh is an avid consumer, and visible proponent of, tobacco. They would both be very happy, no doubt, if regulations of tobacco were eased or revoked.

It is ironic that Republicans have wrapped themselves in the cloak of personal responsibility, but when it comes to the behavior of police officers who shoot down unarmed teenagers, murder twelve year olds with fake plastic guns in public parks, or fire on patrons in department stores carrying toy guns they intend to purchase, personal responsibility is cast aside. And the fact that in all of these recent incidents the victim was an African-American male speaks to the barely disguised racism that infects our society. Particularly when white men exercising their “right” to openly carry firearms in grocery stores and burger joints never seem to encounter any problem with the local police.

BY THE WAY, Cigarette taxes save lives. They deter both adults and minors from consuming a product that will eventually make them acutely sick and probably kill them. Tobacco is far more dangerous than terrorism. In fact, if Al Qaeda or ISIL were interested in raising the number of fatalities they cause, they should consider buying Philip Morris. Cigarettes kill more than 400,000 Americans every year. That’s more than 100 times the death toll on 9/11 and far more than any terrorist organization has ever imagined. Plus it’s entirely legal so they could kill more Americans without having to dodge drones or Navy SEALs.

Nevertheless, the right is obsessed with permitting this wholesale slaughter to continue. And it goes back decades to the seeds of the Tea Party. That’s part of the reason that the AstroTurfed, Koch brothers funded Tea-bacco lobby launched their mission with attacks on public health care.

So not only did cigarette taxes not cause Garner’s death, they have prevented sickness and death for millions of Americans. It gives a whole new and meaning to the hashtag #ICantBreathe.

6 thoughts on “To Rand Paul, Rush Limbaugh, And The Idiots Who Blame Cigarette Taxes For Eric Garner’s Death”