Reminiscing about the year gone by is a favorite pastime of media outlets as the calendar turns the page to a new year. At the top of everyone’s list are lists – generally assembling the best or worst of some category of events. And Fox News is no different as they try to capture those things that resonated for the nation, or at least for their viewers.

However, being so devoted to misinforming their audience as they are, Fox couldn’t help themselves as they demonstrated an Olympian mastery of self-delusion and unintentional comedy. They chose for their topic a collection of what they called “The Worst of the Worst: Ranking the Most Bias (sic) Reporting of 2014” 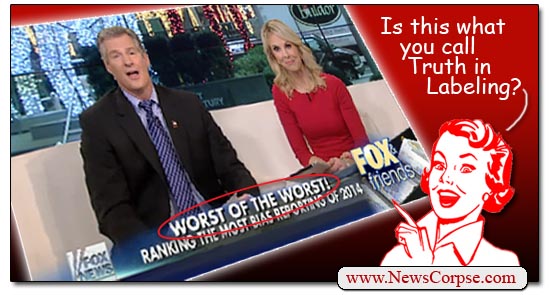 First of all, we can’t let it go by that Fox inadvertently provided the perfect description of themselves in the on-screen graphic for this segment. Either somebody wasn’t paying attention, or there is mole in the studio with a great sense of humor. Moving on…

For the cable network best known for manipulating news stories to fit their editorial obsession, Fox should have recognized the danger of looking foolish by feebly attempting to turn the spotlight around to others. But no, not Fox. They dispatched their crack Fox & Friends crew to tackle this precarious subject ignoring the risks. The segment (video below) was anchored by the recently re-hired Scott Brown, a Republican politician-turned-talking-head who is the only candidate in history to lose two races for the Senate in two years, running in two different states. And shortly after each loss, signing up with Fox News. His co-host was evanga-pundit Elisabeth Hasselbeck, a loser in her own right having been voted off of Survivor only to wash up on the island of Fox & Friends.

Hasselbeck opened the episode by declaring, without a hint of irony or self-awareness, that “It’s been a banner year for bias in the mainstream media.” Then she and Brown welcomed their guest, Genevieve Wood. She was introduced as a senior contributor to the Daily Signal blog. What they left out was that the Daily Signal is the propaganda arm of the ultra-rightist Heritage Foundation, where she has been a member of the senior management. Wood’s appearance was solicited because she was one of the judges for “The Worst of the Worst” awards presented by another fringy right-wing enterprise, the Media Research Center (home to NewsBusters, the lie-riddled, wingnut version of Media Matters).

It was in this atmosphere that the three orthodox conservatives set off to impugn the journalistic skills of their avowed enemies in the press. They began with a swat at the head of NBC News, Jeffrey Zucker, for his refusal to be bullied by Fox into covering the Benghazi hoax. Then came a swipe at CBS’s Scott Pelley, who earned his tribute for correctly reporting that ObamaCare did not result in job losses. Then they defended the family of their Fox colleague Sarah Palin who, with her daughter Bristol, had incited a drunken brawl at an Alaskan beer bash. And finally, they slammed Politico’s Roger Simon for a rather harmless and snarky Tweet.

In what they called a “banner year for bias” they managed to miss every serious incident of it. That may be due to that fact that most of it was occurring right under their noses in the Fox News studios. With a concerted effort to portray everything that President Obama did as a step toward Armageddon, and a devotion to overtly opposing any progressive policy, the Fox news-manglers demonstrated just how media bias is done: With a year-end ceremony hosted by staunchly activist right-wingers, bashing journalists they have long castigated as ideological foes. Is it possible that in 2015 there is still anyone who actually believes that Fox News is “fair and balanced?”