For Americans concerned about how to identify the terrorists in your neighborhood, Fox News has created a convenient tool to be certain that nefarious characters are not overlooked and permitted to wreak havoc. 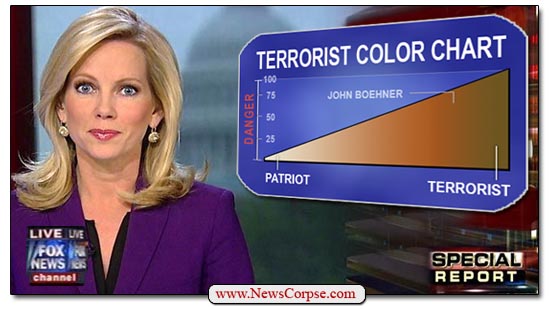 Inspired by the comments of Fox News anchor Shannon Bream during an episode of Outnumbered, this chart is an essential part of every patriot’s anti-terror toolkit. Bream was responding (video below) to co-host Kennedy’s observation that ordinary profiling may not be an effective prevention policy because “sometimes bad guys don’t look like bad guys.” Whereupon Bream offered this bit of wisdom:

“That’s my question about these guys. If we know they were speaking unaccented French and they had ski masks on, do we even know what color they were, what the tone of their skin was? I mean, what if they didn’t look like typical bad guys as we define them when we think about terror groups.”

Yeah, what about that? Obviously the only way we can be sure to keep America safe from bad guys is to have a reliable means of categorizing them so that they can be segregated from the rest of the population and punished appropriately. And thankfully the folks at Fox News are on the case and looking out for us good (i.e. white) guys.

Bream comments begin at 3:10 in this video: