For several years now Fox News and other conservative media have feverishly demanded that President Obama explicitly associate terrorism with Islam. They have accused Obama of being weak, and even treasonous, for his reluctance to do so. Following the Charlie Hebdo tragedy in Paris, the calls for such symbolic rhetoric have built up to deafening levels as Fox ignores the bigger issues in favor of trivial sloganeering.

However, those who articulate this criticism are missing an important point that demonstrates that, not only is the President right, but the critics are overtly aligning themselves with the terrorists.

The logic is really quite simple. When you look at who is insisting that the terrorists be called Muslims you will see only the terrorists themselves (i.e. Al Qaeda, ISIS, etc.), Fox News, and their allies on the far right. On the other side is Obama, religion and terrorism experts, and most of the world’s Muslims. So the real question here is why is Fox News joining with the terrorists in an effort to brand their heinous activities? 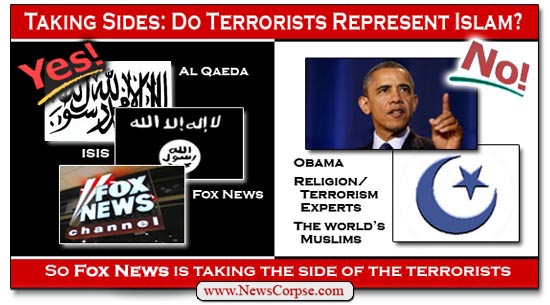 What Fox News is doing is a revolting breach of ethics. They are acting as the PR department for the terrorists who desperately aspire to be regarded as the legitimate voice of Islam. They couldn’t ask for a better partner than Fox in their efforts to brand themselves and to disseminate their pro-terror propaganda.

The problem is that most of the world’s Muslims strongly oppose the association of these terrorist groups with their faith. And despite Fox’s apparent self-inflicted deafness, they have made it abundantly clear that they want noting to do with terrorism or violence or hate. Those repudiating the connection include virtually every major Muslim advocacy group and the most prominent Muslim-majority nations.

On the other hand, Fox, and those who support the network’s position, can cite only a single reason for connecting Islam to the terrorist groups. The justification offered generally states that the terrorists themselves identify as Muslims. So what? That is an argument that is so irrelevant that it is hard to grasp why anyone would take it seriously.

The repugnant extremists of the Westboro Baptist Church, who protest at the funerals of slain American soldiers, identify themselves as Christians. Likewise, the bombers of women’s health clinics insist that they represent the true Christian faith. And for decades the Ku Klux Klan has cloaked its message of hate in Christian dogma asserting their strict adherence to what they call God’s principles. Many hate groups even incorporate their adopted faith into their name, such as the Christian Identity Movement.

Conceding that terrorism is the way of Islam, therefore, amounts to an acceptance of the terrorists terms and definitions. It is a form of appeasement that rewards the terrorists with precisely what they seek: religious legitimacy. And Fox News, along with crusading right-wing pundits and politicians, are playing into their hands. They are, in effect, supporting the goals of the terrorists.

President Obama is absolutely right to deny the terrorists the legitimacy they so desperately want. He is right to respect the majority of Muslims who want nothing to do with the terrorists and have said so repeatedly. The terrorists are no more Muslim than the Westboro freaks are Christian.

By demanding that Obama call the terrorists Muslims, Fox News et al are actually taking the side of the terrorists and helping them to advance their mission. And what makes this even worse is that they are taking that treasonous position solely to harm America’s leadership and standing in the world, and to advance their own petty political objectives and lust for power. It is an abhorrent abuse of their media platform that should offend all Americans.

And despite their best efforts, a few Muslim guests actually got their points across on Fox News:

11 thoughts on “Taking Sides: Fox News Is The Foremost Propaganda Arm For The World’s Terrorists”