Last week I reported that News Corp, the parent of Fox News, the Wall Street Journal, and more, made a donation of $1 million to the Republican Governors Association. It’s bad enough that a major media company is bankrolling GOP campaigns and still pretending to be fair and balanced when they report on those campaigns, but things just got even crazier.

For weeks there has been a raging battle over the proposed construction of an Islamic community and prayer center a couple of blocks away from the site of the former World Trade Center. One of the most frequently repeated criticisms by opponents of the Park51 project is that they wanted to know where the money was coming from. In the absence of that information they alleged, without proof, that the center was being funded by terrorists or groups sympathetic to terrorists. 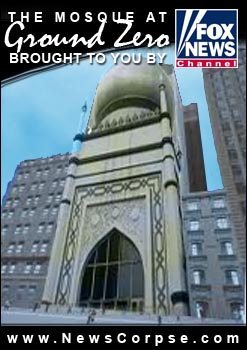 Well now we know precisely where some that funding came from. It has now been revealed that Prince Alwaleed bin Talal, News Corp’s largest shareholder outside of the Murdoch family, has donated over $300,000 to organizations run by Imam Feisal Abdul Rauf, the principal planner of Park51. One of those organizations was the Park51 project itself.

So now that we know that a major shareholder of News Corp is providing funding to Imam Rauf to build the center, will the critics be satisfied and drop their complaints? Will they expand their attacks to include News Corp and Rupert Murdoch? Will they even hear about it on their favorite cable news network, Fox News (who never bothered to report on the million dollar gift to the GOP)?

If this center is such an affront to the victims and survivors of 9/11, then isn’t News Corp and Fox News partly responsible for it? I wouldn’t be too surprised if it was all part of a plot to generate a controversy that would advantage them politically as well as boost their ratings.

Furthermore, if the insult that critics allege is due to the mosque being “near” the site where thousands of Americans were killed, then shouldn’t they also oppose any mosques being built in Iraq? More Americans were killed there than at the WTC on 9/11. Doesn’t that make Iraq “hallowed ground” as well?

I really can’t fathom why a building that is nothing more than an Islamic YMCA is causing such a ruckus. I think it is far more insulting to exploit 9/11, and to use the painful images from that day in crass political advertising. That’s exactly what Republican Roy Blunt has done here, in an ad that takes his opponent, Robin Carnahan, to task for not opposing the center. The ad features a video of the smoking WTC ruin with a voiceover of Carnahan saying…

“I’m not gonna try to tell folks in New York what to do, and I don’t want them trying to tell us in Missouri what to do. So in the end it’s gonna have to be their decision. But, you know, I think this a time when we ought to be trying to get people of all faiths to come together, not divide them.”

If I didn’t know better I would think that’s an ad for Carnahan. What’s wrong with that statement? It’s an affirmation of Missourians interests and a call for peace and brotherhood. Apparently Blunt is against those things.

Another exploitative and disturbing ad was from New York Republican Rick Lazio. In fact he has two of them here and here. Both ads urge his opponent, Andrew Cuomo, to initiate an investigation into the Park51 project. Lazio is one of those who is seeking to ascertain the funding sources. Of course now we know that all he needs to do is ask his hosts the next time he appears on Fox News.

This Just In: Not only is Alwaleed, the News Corp shareholder, a financial backer of Imam Rauf, but Rupert Murdoch’s book division, HarperCollins, is the publisher of Rauf’s book, What’s Right with Islam Is What’s Right With America. When will the right-wingers start to hold Murdoch & Co. accountable?

14 thoughts on “Who Is Funding The NYC Mosque? Fox News!”