Conservatives have tenaciously sunk their fangs into the juicy scandal that is engulfing NBC News anchor Brian Williams. The fact that he has admitted (and apologized for) some false statements he made several years ago regarding his experiences covering the war in Iraq is troubling and particularly so for people who make their living on their reputation for honesty.

However, the degree to which the right has gone overboard with their overt hostility is a spectacle that is worth watching for the sheer entertainment value. Although it’s not as if they wouldn’t be showering their hatred on Williams and the rest of the so-called “lamestream” media even if their weren’t some budding scandal. For its part, Fox News has been exhibiting a Benghazi-like obsession with their relentless coverage of the story.

What’s missing from all of this is any sense of perspective or context. Has Fox given equal time to the false assertions by their own Geraldo Rivera who excused his lies as being the fault of the “fog of war?” Of course not. Neither do they make a distinction between the lies advanced by mis-remembering a distant event in the past in order to enhance one’s own personal image, and the lies perpetrated deliberately by national leaders (i.e. George Bush, Dick Cheney, etc.) that resulted in the violent deaths of thousands of American soldiers and hundreds of thousands of innocent, non-combatant Iraqis. 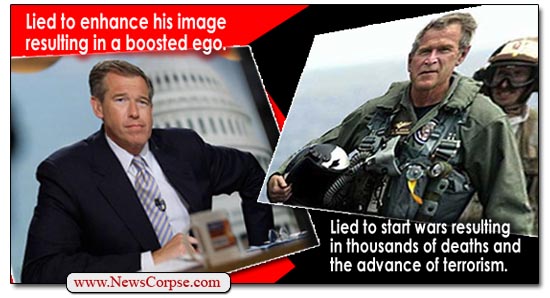 Nearly every discussion about Williams in the Conservative Media Circus includes outright demands for his termination. Never mind that the false statements made over a decade ago were not made during a newscast or presented as part of his duties as a journalist. The wingnut brigade wants Williams fired for having said some things on David Letterman’s late-night comedy program.

Well, if that’s the standard they are embracing, then let them apply it to Bill O’Reilly as well. Back in 2006, O’Reilly took an extended book promotion tour to Kuwait where he visited with soldiers and signed copies of his book. Reports at the time described how “servicemembers asked O’Reilly about his own tour of duty in Kuwait during Desert Storm.” That might have been an interesting story except for the fact that O’Reilly never did a tour of duty in Kuwait during Desert Storm, or anywhere else since he never served in the military at all.

More recently, O’Reilly told his radio listeners about how he would have coaxed information out of an enemy soldier based on his personal experiences in combat (video below):

“I tell you what, I’ve been in combat. I’ve seen it. I’ve been close to it. And if my unit is in danger and I got a captured guy and the guy knows where the enemy is and I’m looking him in the eye, the guy better tell me. That’s all I’m gonna tell you. If it’s life or death, he’s going first.”

As noted above, and contrary to his statement, O’Reilly has never been in combat. Consequently, he has never commanded a unit or had to contemplate how he would deal with an enemy prisoner. His pretend bluster and machismo is all just a bunch of fantasizing of himself as a hero. So how is that any different than the offenses for which Williams is being pilloried?

There are, however, some very real differences between Williams and O’Reilly. Williams has been found to be less than truthful on this one occasion. O’Reilly has lied repeatedly over his career at Fox News with plenty of documentation to prove it. What’s more O’Reilly has demonstrated himself to be an arrogant, rude, bully who shoves his usually inane opinion down the throats of his guests and his viewers. That’s something that cannot be attributed to Williams.

So if anyone should lose their job over any of this, it would be most advantageous to the television viewing audience, and to society in general, if it is O’Reilly. But don’t count of Fox News to do the right thing. It would be against everything they hold dear.

h/t Meteor Blades at Daily Kos for the video.

19 thoughts on “When Will Fox News Fire Bill O’Reilly For Lying About Combat Duty?”