In recent days there has been a flurry of activity (mostly concentrated within the Republican National Committee and Fox News) asking in faux-worried tones where Hillary Clinton is hiding. Of course, Clinton is neither a public official nor a candidate for office, so her whereabouts are strictly her own business. Nevertheless, the “Hillary Hiding” campaign was created by the RNC and Fox picked it up verbatim to enhance their already festering anti-Clinton programming. And as usual, they have a severely myopic view of the world and are oblivious to the missing persons among their own ranks.

In case you missed it, Sarah Palin has an Internet “channel” where subscribers can pay $9.95 a month to get her stream of unconsciousness meanderings on the issues of the day. The website, which launched just six months ago, tantalizes prospective fans with the promise that you can…

“Connect with me every day here in my home in Alaska and on the road in our great country! Ask me anything. Every week I answer your questions. Plus, be the first to see my ideas for America and my take on the big issues of our time.” 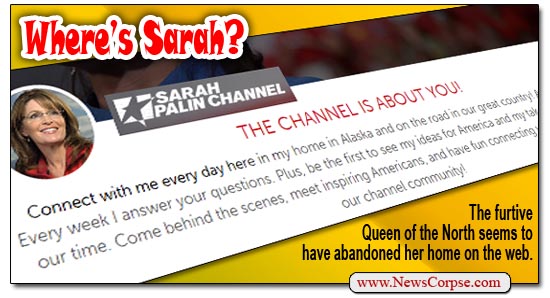 The only problem is that she has not updated the site with any new content for the past ten days. Subscribers might be wondering just what they are paying for right about now. Her last post was on February 5 and addressed the “big issue of our time” of how the ultra-affluent attendees of the World Economic Forum in Davos, Switzerland arrived in private jets. Oh my. For some reason Palin is disparaging the one-percenters (aka business leaders, aka job creators) for enjoying the lifestyle that God intended for them to have by virtue of their ability to create wealth.

Ever since that post her site has been silent. However, we ought not to jump to conclusions because in early January there was a similar ten day absence of Palin’s unique vision of America’s condition. So in the first two months of 2015 Palin has already shorted her subscribers at least 33% each month. Will they get a refund? Or did the Quitta From Wassila just quit again while her fans continue to get charges automatically applied to their credit cards?

Perhaps Palin was just too busy to post because of her other responsibilities making an ass of herself at campaign stops in Iowa, where even conservative allies were shocked by her embarrassing performance. Or maybe the obligation to record more lame video selfies for an audience that had already shelled over their moola was less of a priority than her paid pandering to Big Oil at a conference in Houston, Texas. Palin promoted her appearance at the North American Prospect Expo on her Facebook page saying that…

“There’s reason for great hope that American-made oil and gas supplies can energize our nation, making reliance on foreign energy sold to us by unfriendliness a thing of the past. Bottom line: drill, baby, drill works.”

“Sold to us by unfriendliness?” That’s the sort of brilliance for which organizations fork over thousands of dollars a pop for Palin’s word-salad soliloquies. Her speech focused on bragging that her bumper-sticker theory of economics, “drill baby drill,” was responsible for lowering the price of gas. Of course she ignored all of the real reasons that include declining demand, increased adoption of fuel-efficient vehicles and alternative energy, and the world oil markets that are dominated by OPEC.

What this proves is that Palin is still the grifter that she has always been. Her primary motivation is to promote and enrich herself at the expense of all the little people (or giant corporations) who are too dumb to recognize a scam when it is bleeding them dry. While Glenn Beck is a notoriously paranoid conspiracy theorist and wannabe evangelist, at least he gives his suckers new material to chew on every day via his radio program and Internet sites. Palin simply takes their cash and jets off to a highly paid speaking engagement with contact riders that demand first-class travel and lodgings. But I’m sure her fans and benefactors are getting their money’s worth, so long as their expectations are as low as her ability to deliver.