Have you finally gone completely off your titanium-reinforced, bubble-enclosed, Viagra IV-fitted, rocker? Not that anyone could tell the difference from what you have been spewing for the last quarter century, but your latest tirade is either evidence of a severe thrombotic stroke, or you are deliberately providing late night comedians with new material. 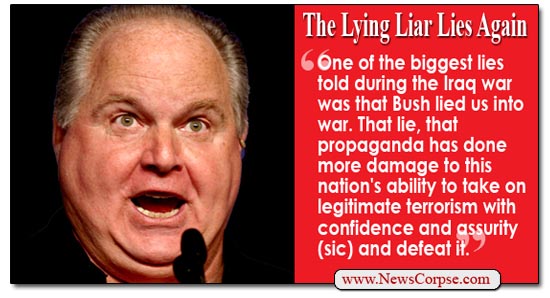 Your re-imagining of recent history with regard to the catastrophic falsehoods that were dispensed by the Bush administration in order to justify the invasion of Iraq is simply preposterous. Rather than recognizing the reams of documentation that the Bush administration mislead the nation and the world about “Weapons of Mass Destruction,” you attempt to turn that fact into a lie saying that…

“One of the biggest lies told during the Iraq war was that Bush lied us into war. That lie, that propaganda has done more damage to this nation’s ability to take on legitimate terrorism with confidence and assurity (sic) and defeat it. For however many years the Iraq war went on, every night on Comedy Central, practically every night, the audience there heard about it was all a lie. That Bush lied, people died, Bush Hitler.”

So it’s Comedy Central’s fault that America has failed to eradicate terrorism from the planet? [Damn you Jon Stewart!] And because of them the U.S. military has been drained of its legitimacy and confidence? That’s a pretty nasty remark to make about the heroes who are defending your freedom. Setting aside your contention that “practically every night” they were associating Bush with Hitler (which is more like never on any night), the assignment of responsibility to a cable comedy network for what you believe to be damaging to military readiness should be cause for concern by those who care for you. But you didn’t stop there:

“Every night for whatever number of years, seven years, six years, Comedy Central, Stewart, Colbert, you name it, Bush lied. The mainstream media, every day, every week, Bush lied. What did that do? In the minds of young skulls full of mush, it turned around the Iraq war into a joke, number one. It turned Bush into a joke. It turned the country into a joke, and it told everybody that everything we were doing over there was illegitimate because we had no business being there, that there was no terrorism.”

For your information, Bush didn’t need any help to be turned into a joke. And America’s “Young Skulls Full Of Mush” [YSFOM: The name of my next punk rock band] had the same opinion as most of the rest of the nation about his criminal adventures in the Middle East. We didn’t have any business being there since it had nothing to do with the attacks on 9/11, and all of the evidence presented as validation was fabricated.

For much of your rant you diverted to subjects that had no bearing on your topic. For instance, you found some excuse to complain bitterly that feminist extremists were pushing an agenda that defined all sex in college as rape. I have a disturbing notion that you are subconsciously projecting your own experiences during your truncated college years which, by all indications, were unsuccessful both academically and socially. And when you returned to the harangue of the day, your hostility could no longer be restrained and was loosed with a fury at the innocent and unsuspecting fans of a television comedy channel:

“Many of these people make up the deranged, literally insane, filled with hatred, Democrat Party base. And Obama can’t call it terrorism because his comedian buddies have spent seven years saying it didn’t exist.”

Well that settles it. Now that you have established that the millions of “literally insane” hate-mongering viewers of political satire are the core of the Democratic Party it will be much easier to dismiss them when they point out that your insights about the President are completely without merit. Where, for instance, did you get the idea that Obama’s comments about terrorism were influenced by “his comedian buddies?” Even if that were true, it’s better than being influenced by the terrorists, which is the case for you, Fox News, and other right-wing bloviators.

In closing, it is hard to fathom your assertions that the YSFOM ever accused Bush of lying about ISIS since there was no ISIS when Bush was president. Maybe you are conceding the fact that his ill-advised policies resulted in the creation of ISIS and led to a rise in terrorism worldwide. But that would require an assumption that there is still some remnant of sanity in your diseased brain. Lacking any other corroborating evidence of that, it would be safer to assume otherwise.

Yours truly (if you still know what that means),
The Deranged, Literally Insane, Filled With Hatred, Democrat Party Base.
cc: Young Skulls Full Of Mush

7 thoughts on “An Open Letter To Rush Limbaugh From The Deranged, Literally Insane, Filled With Hatred, Democrat Party Base”