The controversy over remarks by former New York City Mayor Rudy Giuliani have taken a turn for the absurd. Last week Giuliani spoke at an event for Wisconsin Governor and prospective Republican presidential candidate Scott Walker. During the affair he charged into a rhetorical minefield by questioning the patriotism of President Obama saying…

You have to wonder why Giuliani would continue talking after admitting that he was about to say something horrible. But he, like many of his pals on the far-right, has adopted the tactic of “othering” the President – the practice of portraying Obama as different, foreign, even treasonous, but always as something removed from the American experience and people, and viscerally opposed to American values. Never mind that a majority of the American people voted for him twice.

Giuliani’s subsequent remarks defending himself went even further. He is now mimicking the fringy slander of everyone’s favorite delusional conspiracy theorist, Glenn Beck. You may recall Beck’s attempt to brand the President as not particularly fond of America when he told Fox News that…

“This president, I think, has exposed himself as a guy, over and over and over again, who has a deep-seated hatred for white people or the white culture.” 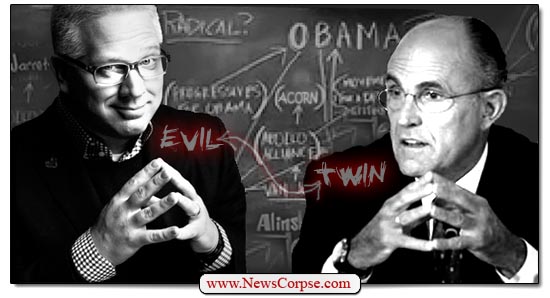 Beck went on to spin paranoid fantasies about Obama’s past that painted him as a child of a communist sleeper cell with subversives as nannies and revolutionaries as tutors. Now Giuliani is weaving the same tales. He told Rupert Murdoch’s New York Post that the nine year old Obama “was influenced by Frank Marshall Davis, who was a communist.” He raised the specter of Saul Alinsky, a favorite bogeyman of Beck’s, saying that he too was “another bad influence” on the future president. He resurrected the Rev. Jeremiah Wright from the wingnut graveyard of yesterday’s smears and said that “Obama never left that church,” which might be an interesting point except for the fact that he very publicly left way back in June of 2008, before he was president.

Giuliani is reading straight out of Becks hymnal. Whatever anyone thought of Giuliani before, there is no escaping the fact that he is now no more credible than the fruitcake that was even too nutty for Fox News. But Giuliani has his own trail to blaze. He’s convinced that his comments cannot be racist because Obama’s mother was white. That, of course, counteracts any racial effect arising from the color of his skin. Giuliani even has his own death threats to brag about, stealing Beck’s Messiah complex and making himself the victim in all of this. Nevertheless, he heralds his own heroism as he congratulates himself because…

Exactly. And it was Glenn Beck who stood up six years ago to trumpet this nonsense. He was joined by Alex Jones, Donald Trump, Michelle Bachmann, Sean Hannity, Ann Coulter, Rush Limbaugh, and more conservative crackpots than you can count. But Giuliani apparently thinks there’s still time to join the parade and he’s determined to worm his way to the front of it. Well, he’s making a good start.