The annual parade of wingnuttery known as the Conservative Political Action Conference has been steaming along for a couple of days now. Most of the star attractions have had their say and the general message that we can take away from the affair is that President Obama is an Islamic terrorist, Hillary Clinton is an old liberal, and ObamaCare, Common Core, the IRS, and immigrants must all be abolished.

How’s that for an electoral platform for 2016? It’s pretty much the same agenda that has been broadcast on Fox News for the past six years. And the clapping conservo-bots in the CPAC conference hall responded precisely the way they were trained to respond. Not a single speaker said anything new or insightful. It was hour after hour of regurgitated right-wing dogma, and it absolutely thrilled the glassy-eyed audience who couldn’t have been more predictable if they were hooked up to a machine. 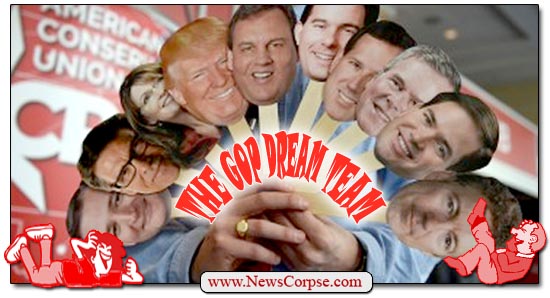 However, just for the sake of entertainment, there were a couple of moments that deserve some special attention. And it wasn’t Ted Cruz whining about ObamaCare, or Sarah Palin pretending to support the troops, or Scott Walker comparing American working people to terrorists, or Ben Carson calling for unity after saying that, because of liberals, America is very much like Nazi Germany. None of those easily foreseeable sentiments earn much more than a yawn. But there was some unintentional comedy displayed at the conference.

First of all, we have Duck Dynasty’s patriarch Phil Robertson. This long-haired, bearded, headbanded, camo-clad freak took a swipe at hippies. Has he ever seen one (or looked in the mirror)? Somehow that clean living, nature loving subculture that faded into obscurity forty years ago is to blame for every sexually transmitted disease in America today. Now that’s a powerful message for a 21st century Republican Party.

Robertson was invited to the conference to receive the Andrew Breitbart Defender of the First Amendment Award, which is not even worth the time or energy to make fun of. In his remarks Robertson divided the nation into the pious patriots for whom the Constitution was written and “any other” treasonous sinners who are not entitled to its liberties:

“You know what’s happened GOP? We’ve got too many “any others” in the White House. It [the Constitution] wasn’t written for them. […] Stand on the Bible, stand on the Constitution, don’t budge. Hold on to your weapons. That’s what brought us here. We had to have all three to run the Brits back to where they came from.”

Let’s just set aside the divisive elitism that Robertson evokes in order to elevate himself above those he regards as his inferiors. Robertson’s assertion that we needed the Bible, weapons and the Constitution to beat back the British has a glaring flaw. There was no Constitution until four years after the Revolutionary War was won and over. And the British also had weapons and the same Bible, but it didn’t lead them to victory.

The other moment of hilarity was the speech by Donald Trump, the reality TV show host who is so bad at real estate that he couldn’t profitably run a casino (a casino!), and has declared bankruptcy four times. Trump, as usual, spent his time bragging and promoting himself as the bestest, toughest, smartest, conservativest person in the room. He said that he is 80% sure that he is running for president. You could still make a bundle betting against it. He will pull out as soon as he is asked to release his financial statements.

Trump ventured back into the birtherism that he has long espoused. He claimed that Obama “wrote a book when he was a young man and it said born in Kenya.” That’s a flat-out lie. Trump also bragged that he was responsible for Obama releasing his birth certificate. That’s a flat-out lie. Then he bleated “Now we have to find out whether or not it was real.” So Trump is still a full-bore birther. Funny, he has never told us what happened to his team of investigators that he claimed he sent to Hawaii. Does he ever get tired of making a fool of himself? What’s worse is that there was a room full of people who applauded his raving madness.

If you thought that 2012 was fun, with its circus of right-wing loonies, you aint seen nothing yet. 2016 is already shaping up to be even wingnuttier. I really can’t wait for the campaign season to get started.

11 thoughts on “Now THIS is Comedy: The Conservative Political A-Hole Conference (CPAC)”