The heat is being turned up on pathological liar Bill O’Reilly and his enablers at Fox News. The numerous accounts of his deliberately falsifying his resume with self-aggrandizing tales of journalistic heroism continue to be the source of deserved criticism and ridicule. The latest dishonorable mention for O’Reilly comes from comedian Bill Maher, who was characteristically candid on his HBO program last night (video below). 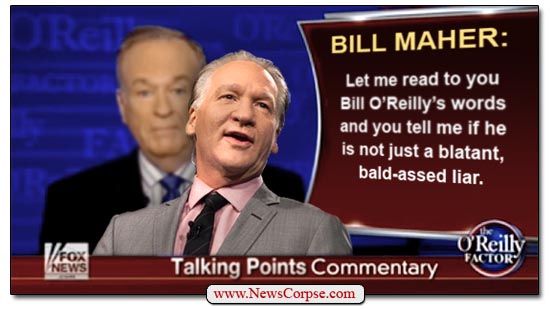 Maher was puzzled about the lack of attention that O’Reilly has received from much of the press for his obvious embellishments and outright lies about his experiences as a reporter. So Maher let O’Reilly’s own words bury him by merely reading the things that O’Reilly said that have been proven to be false.

“These are out-and-out lies. Now, I understand why Fox News backs him because they’re not really a news service. They’re like, ‘You expect the truth? That’s not what we do here.’ But why isn’t the mainstream media going after him with the same ferocity – the supposedly ‘liberal media’ – as they did to Brian Williams?”

Good question. At this point the evidence of O’Reilly’s dishonesty is overwhelming. His resorting to overt threats aimed at reporters covering the story is typical of his bullying tactics. His cowardly refusal to address the substance of the allegations proves that he has no defense other than to shout and stamp his feet and brag about his ratings.

Indeed, O’Reilly’s ratings are quite good for a cable news program. But that’s nothing to brag about when your product is unmitigated bullcrap. By failing to hold O’Reilly accountable, Fox News is embracing and condoning his moral and professional transgressions and conceding that their network proudly employs liars and engages in unabashed deception. It is an insult to their viewers who they presume will accept any heaping portion of steaming shitola that’s put in front of them. Well, on that note Fox may be right. After all, their viewers have been eating up O’Reilly and Sean Hannity and Sarah Palin and Donald Trump for years.

The mindset of Fox was perfectly framed by Maher’s conservative panelist, Genevieve Wood of the ultra-rightist Heritage Foundation. She excused Fox’s failure to sanction O’Reilly because, unlike Williams who acknowledged and apologized for his embellishments, O’Reilly stubbornly denies that he misrepresented anything in his past, the facts notwithstanding. In a state of severe delusional panic, Wood said…

“Fox is going to defend him as long as he’s saying ‘I did what I said I did,’ and nobody else is really able to challenge it.”

Huh? Everybody else is able to challenge it. And it isn’t just people who have different recollections of the distant past. There are contemporaneous videos and tape recordings of O’Reilly himself that contradict his present day mythologies about his grand adventures. But Wood’s justification neatly fits the Fox view of news. They regard it as a mutable commodity that can be molded to whatever serves their agenda. And Fox will indeed continue to defend O’Reilly because he is doing what they pay him to do – which is to lie.

Consequently, it is time that the rest of the media acknowledge that Fox is not in any way, shape, or form a news enterprise. They are purveyors of propaganda and disseminaters of deception. They have no journalistic principles or respect for their audience. They are comfortable with liars like O’Reilly because lying doesn’t violate their standards, it upholds them. And for those who say that O’Reilly’s malfeasance is different than Williams’ because O’Reilly is an opinion commentator and not a journalist, they need to remember that he was, in fact, a journalist when he did the things about which he is lying today. Also, when discussing factual events there is no exemption from truth-telling for opinion commentators.

Finally, for those who say that catching Fox News lying isn’t newsworthy because everyone knows they do it, that is a cop-out. It remains the obligation of legitimate news operations to report the sort of serious departures from the truth that O’Reilly has demonstrated. And any news organization that condones such dishonesty must not be treated as a credible news source. The media cannot continue to pretend that Fox has anything to do with news.