This morning on CNN’s “Reliable Sources” host Brian Stelter interviewed the former host of the Fox News program “News Watch.” That program was canceled in 2008 and its host, Eric Burns, was fired. It’s replacement, “MediaBuzz,” is now led by a more reliable hack, Howard Kurtz, who isn’t troubled by having to peddle the partisan garbage that Fox spews. 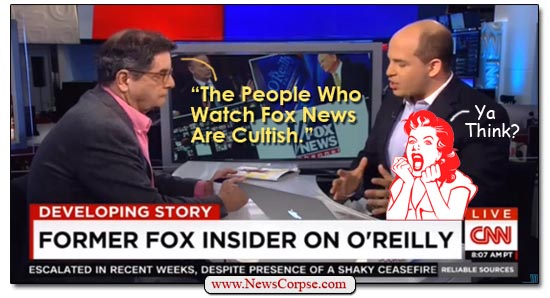 On Reliable Sources, Stelter raised the ever-expanding controversy over Bill O’Reilly’s diuretic flow of lies about his past adventures as a news superhero. Stelter opened with with statements from the order of nuns who lost four of their members to death squads in El Salvador. They were disturbed by O’Reilly’s false assertion that he had personally witnessed the executions. O’Reilly later admitted that he had only seen photographs, but failed to apologize or even acknowledge that his prior claims were false.

At the top of the interview segment, Burns told Stelter that he had experienced the extraordinary effect of the audience loyalty at Fox News, saying that “The people who watch Fox News are cultish.” [a condition that News Corpse documented a few months ago] and that “O’Reilly, as the head of the cult, is not held to the same standards as Brian Williams. Burns went on to give credit to MSNBC’s Keith Olbermann who had frequently pointed out O’Reilly’s predilection for lying, with evidence proving it. Then Stelter asked Burns to comment on the shift by Fox News to ever more right-wing slanted programming. Burns said that…

“I thought that as Fox got more and more popular that Roger Ailes, who runs the network, would say ‘Well, the right has nowhere else to go, so if I move a little more to the center I can get a bigger audience and not lose my core audience.’ He did just the opposite. He went more to the right.”

It’s important to note that Burns hosted a program that was already severely slanted to the right. He had four panelists that included a single “liberal,” pretty much setting the model for every other panel on Fox (i.e. MediaBuzz, The Five, Special Report, Cashin In, Fox News Sunday, etc.). So Burns is no progressive mole. However, he was astute enough to recognize the downside of being associated with Fox News and replied to inquiries after his departure by expressing relief that…

On Fox’s MediaBuzz this morning, host Kurtz completely ignored the O’Reilly affair, choosing instead to focus on negative stories about Hillary Clinton’s email, Obama’s speech in Selma, AL, and Netanyahu’s speech before Congress. Throw in a suck-up profile of Rand Paul and all of the criticisms expressed by Burns begin to be obvious. But don’t tell that to the cult members who watch Fox. They threaten to throw another Tea Party.

And Speaking of Cults: Get the ALL NEW 2nd volume of
Fox Nation vs. Reality: The Fox News Cult of Ignorance.
Available now at Amazon.