Three weeks ago News Corpse published an article revealing that Bill O’Reilly of Fox News had been less than truthful about his alleged exploits as a “war” correspondent. Two weeks later Mother Jones Magazine did an even more thorough analysis of O’Reilly’s pathological embellishments with solid evidence of blatant dishonesty. Ever since then the flow of embarrassing revelations that expose O’Reilly as a self-aggrandizing, jet-powered ego has run non-stop. 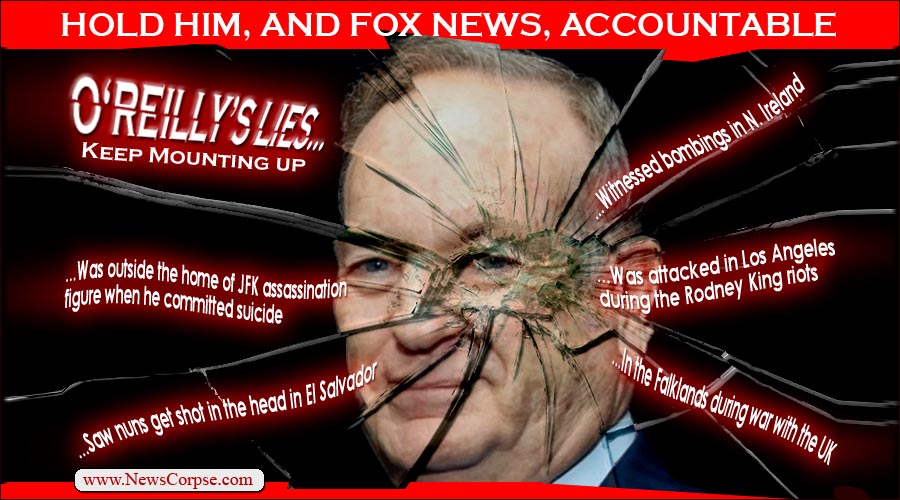 ONE: The parade of falsehoods began with O’Reilly’s claim to have been “on the ground in active war zones” during the Falkland Islands war with the United Kingdom. He wasn’t. And now there is video of him reporting from Buenos Aires, Argentina that contradicts the accounts he gave afterward.

TWO: O’Reilly also claimed to have been outside the Florida home of George de Mohrenschildt where he said that he heard the shotgun blast that marked his suicide. De Mohrenschildt was an associate of Lee Harvey Oswald and was scheduled to testify at a congressional hearing on the JFK assassination. However, a recording of a contemporaneous phone call shows that O’Reilly wasn’t even in Florida when de Mohrenschildt died.

THREE: On another occasion, O’Reilly told a story about how he “saw nuns get shot in the back of the head” in El Salvador. That also was not true and O’Reilly himself admitted it in a statement that said he had actually just seen some “images of violence” but did not witness the incidents himself. Oddly, while admitting that his original assertions were false, he neither apologized nor acknowledged any wrongdoing.

FOUR: This was a similar case where O’Reilly spoke of his visit to Northern Ireland. While there he claimed to have witnessed bombings, however, when challenged Fox News issued a statement similar to the one about El Salvador that said he had merely seen pictures.

FIVE: Then there was the time that O’Reilly was covering the riots in Los Angeles sparked by the acquittal of the police officers who beat Rodney King. He claimed to have been the target of attacks by rioters, however, his associates covering the story deny that any of them were assaulted or injured. They do, however, contend that some tensions flared due to O’Reilly being an asshole.

These fabrications by the guy who pretends to be running a “No Spin Zone” are hardly the only times he has lied. There have been numerous other episodes including bragging about winning two Peabody Awards (he didn’t), and claiming to be a registered Independent (he was a Republican for several years at the time).

Some other incidents may not have been lies technically, just horribly wrong statements that he refused to correct. For instance, he once argued that there were no homeless veterans in America; as proof that his boycott of France was working he offered a report by the “Paris Business Review,” which does not exist; and he insisted, after doing extensive research, that no one on Fox ever said that people who didn’t pay ObamaCare penalties would be subject to prison. PolitiFact gave that one a “Pants on Fire.”

After NBC suspended Brian Williams for six months for a single incident of embellishing his experiences in Iraq, it seems like a fair and balanced review of O’Reilly’s behavior would net him a suspension of two or three years. Of course, Fox News does not generally hold itself to the standards of journalistic ethics to which real news enterprises adhere. Nevertheless, O’Reilly and Fox News should not be allowed to sweep these fibs under the floorboards. They must be forced to correct the record, submit to punishment, apologize to their audience as well as to those whose valor they stole, and make a good faith effort to ensure that it does not happen again.

Short of that, we must make sure that the truth is disseminated widely and continues to be raised whenever Fox or O’Reilly seek the trust of the public they are so badly abusing. If they don’t atone in some manner for their misdeeds, then news consumers must be reminded continuously that Fox News and Bill O’Reilly are charlatans that cannot be trusted to tell the truth. So keep the pressure on and let any advertisers know that you don’t appreciate them supporting unabashed liars.

15 thoughts on “Bill O’Reilly’s Cavalcade Of Lies: A Handy Collection Of The Damage – So Far”