Not since the days of Keith Olbermann’s reign at MSNBC has Bill O’Reilly resorted to such relentless attacks on the network. His perceived victimization by a media cabal that he says is simultaneously impotent and omnipotent is reaching psychotic levels. And all of this is due to the fountain of lies that he has been spewing for decades and for which he is now being called upon to answer.

O’Reilly’s latest retaliatory harangue (video below) came at the opening of Monday’s Factor where he set out to claim once again that everything he does is sanctified by God because he has high ratings (First Church of Nielsen the Redeemer). His Talking Points Memo, titled “Hating Fox News,” heralded a new Quinnipiac poll that O’Reilly bragged “shows that Americans trust Fox News more than any other TV news agency by a substantial margin.” 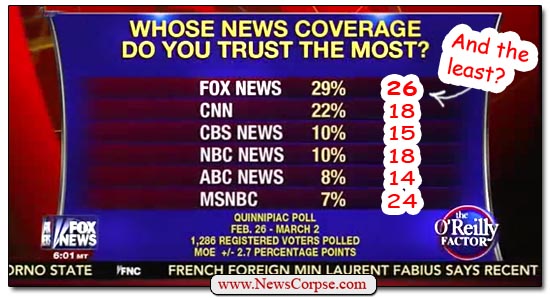 As anyone familiar with O’Reilly’s aversion to the truth would know, he did not tell the whole story. The same poll shows that Fox News is also the network that is least trusted by Americans. Now why do you suppose he left that out? The fact that Fox received a vote of confidence from 29% of the poll’s respondents means that 71% trusted another network more. That is not exactly something of which to be proud. What’s more if you add up the two categories of positive responses for trusted networks (a great deal + somewhat), Fox News is second to the last. It beats only MSNBC by a mere 3%.

If anyone is “Hating Fox News” it is the majority of the American people who reject its frothing hostility, fear mongering, and perversion of the facts. But no one should mistake O’Reilly’s tirade for a reasoned commentary on the popularity of the media. This rant is a thinly veiled assault on those who are demanding that he come clean about the frequent lies he has told to portray himself as an intrepid reporter risking life and limb to bring truth to the people. But rather than taking on his critics forthrightly, he takes a more cowardly approach by pretending to be a victim of powerful enemies seeking the destruction of his employer. He’s attacking a broader, ambiguous foe because he’s afraid to face his critics head on. And of course that foe is, in his mind, a humongous titan of evil, even though he also insists that it is a weakling that has no support and can’t compare to the superhuman powers of Fox News.

Somehow all of this makes sense in O’Reilly’s cartoon brain. However, his campaign against his critics consists entirely of bluster, distractions, and outright threats. That’s why in Monday’s program he never once addressed the growing number of documented falsehoods he has been caught telling. He just continued boasting about his ample audience and the prominent role that Fox News plays in shaping the American media.

On that note, O’Reilly pulled back the curtain on the journalistic fraud that is Fox News. The facade of fairness and balance is just another one of the lies that are baked into the Fox mission. In this one episode O’Reilly repeatedly confessed to the unethical biases of Fox. For instance, he said that…

“The fact is that Fox News is now a deep threat to the progressive movement and the far left despises us so they are in full attack mode desperately trying to marginalize FNC.”

“There are just two national news agencies that challenge the progressive agenda with authority: the Wall Street Journal editorial page and the Fox News Channel.”

“If FNC did not exist, America would be a far different place and the far left ideology would have a far easier time. But we do exist and now dominate the primetime news cycle. Not good news for progressive politicians, the liberal media, and crazed zealots on both sides.”

How are any of those overtly partisan statements consistent with the practice of professional journalism? O’Reilly is admitting that Fox is a political advocate of the right. This is why most media observers regard Fox as nothing more than the PR division of the Republican Party. Additionally, O’Reilly’s analysis that Fox’s very existence is bad news for progressives flies in the face of reality. Someone should inform him that President Obama was elected twice despite the existence of Fox which fought so hard against him.

There is one thing, however, that O’Reilly got right. America would be a far different place without Fox. There would be far less wingnut propaganda and conspiracy theories masquerading as news. We wouldn’t have to deal with wild goose chases for presidential birth certificates or claims that snowballs disprove the scientific evidence of Climate Change. Mentions of Sarah Palin and Donald Trump would produce confused looks and replies of “Who?” And the Tea Party would still be a gathering of folks who appreciate brewed herbs and pastries.