For several year now the mantra that has been chanted on Fox News and other right-wing media is that racism is a thing of the past. America’s shameful legacy of prejudice was allegedly buried sometime between Rosa Parks’ refusal to give up her seat on a bus and Barack Obama’s election to the presidency. Never mind the continued instances of discrimination in hiring, housing, and education, or the horrific violence and intimidation that persists, or the many chapters of the KKK and other congregations of bigots that flourish in many parts of the country. 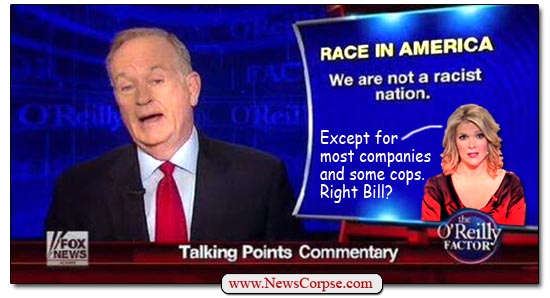 For some people the fact that a little more than half of America’s voters chose an African-American president is evidence that the old hatreds have disappeared. But anyone who believes that just needs to ask themselves “What about the other half.” The presence of racism is visible to anyone with eyes and ears and a mind uncluttered by political partisans trying to eliminate a thorny campaign issue. You need look no further than the video that popped up this week showing members of the Sigma Alpha Epsilon fraternity at the University of Oklahoma to understand the depth of the problem that still persists.

The evidence notwithstanding, there are still deniers that either refuse to acknowledge the existence of racism, or excuse it as a trivial matter that doesn’t really interfere with anyone’s pursuit of the American Dream. And last night on Megyn Kelly’s program on Fox News she managed to dismiss the obvious occurrences of institutional racism in Ferguson, Missouri, that were outlined in a report by the Justice Department. Reacting to a portion of the report that addressed racist emails by Ferguson police officers, Kelly said that…

“There are very few companies in America [where] you won’t find racist emails.”

That was her defense of the Ferguson PD? First of all, a police department isn’t a “company.” And while there is no justification for Brewski Barn employees to be exchanging racist emails, law enforcement officers must be held to a higher standard. The inherent power that comes with the badge, not to mention the Constitution, requires unambiguous fairness and equal treatment. The fact that Kelly can wave off racist emails by the police is disturbing all by itself.

However, Kelly’s remarks have another component that must not be ignored. She is flatly asserting that most American companies are harboring racist employees. But didn’t Fox News declare that racism is over? What about these declarations of America’s racial harmony:

There you have it, racism is kaput. And yet Kelly explicitly states that racist emails can be found at all but a few of American companies. So which is it? Has America solved its race problem and embraced its rich heritage of diversity? Or are there legions of bigots firing off offensive messages on business computer networks seemingly free of any shame or concern about being caught?

Either way, Kelly’s points are utterly absurd. If she’s right about the racism at most American companies, how does that excuse the racism at the Ferguson Police Department? Although it was her intent to refute the Justice Department’s report, she has only succeeded in affirming the need to better scrutinize the behavior of local police departments. And for good measure she has opened the door to more reflection on the overarching problem of racism across the nation at all of these companies she has just called out.

Sadly, Kelly’s objective was to dispel all criticism of racism, whether it be imposed by cops or accountants. Her argument is that since racism is so prevalent at workplaces across the nation, why should anyone bother about it by police officers? The idiocy of that argument is self-apparent. And it’s almost as stupid as her colleagues at Fox who say that racism doesn’t exist anymore.