This past weekend marked the 50th anniversary of one of the most iconic events in America’s history. In 1965 hundreds of protesters organized a march from Selma to Montgomery, Alabama to demand an end to the institutional racism that kept African Americans from exercising their right to vote. The marchers were met on the Edmund Pettus Bridge by state troopers who beat them with nightsticks, trampled them horses, assaulted them with water cannons, and left many of the peaceful marchers severely injured.

John Lewis, now a U.S. congressman, was among those who suffered at the hands of the segregationist southern establishment. The televised images of the brutality directed at the marchers played a significant role in elevating the civil rights crisis to a national priority.

So how did Fox News choose to cover this historic commemorative occasion? This morning on Fox & Friends the Kurvy Kouch Potatoes devoted the whole of their Selma segment to complaining about a photo that appeared in the New York Times. Later, the ladies of “Outnumbered” did the same thing. The photo in question was of President Obama walking arm-in-arm with some of the figures who participated in the original march fifty years ago, including Rep. Lewis. But the Fox crew completely ignored the cultural importance of the event in order to play out their obsession with being victims of the “liberal” media. 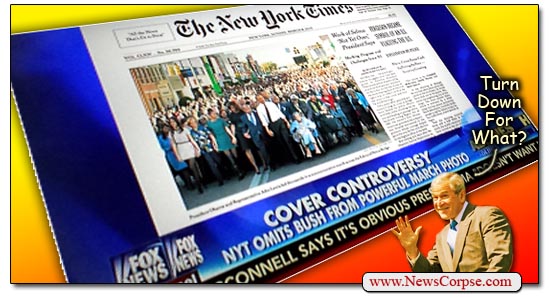 Dispensing with any discussion of the state of civil rights in the intervening years, Fox focused on their allegation that former president George W. Bush had been deliberately cropped out of the photo that appeared in the New York Times. To them this was further evidence of how the liberal media distorts the news and robs conservatives of their rightful place as champions of civil rights.

There are two small problems with that characterization. First, the Times did not crop the photo at all. They printed the entire photo that had been supplied to them. The photographer had quite reasonably framed the photo to put President Obama in the center, thus missing Bush who was far off to the side. Other photos were taken of the event that show Bush, however, in order to reveal the whole front line of the march, the picture would have either consumed the entire width of the paper or been reduced so that no one could have been recognized.

The second problem is that the notion that Bush is an indispensable component of any photo of a civil rights march is ludicrous. In his eight years as president, Bush attended only one of the annual meetings of the NAACP. His Justice Department investigated the organization with an aim to remove its tax-exempt status. He opposed affirmative action and other legislative remedies to racism. And he appointed Supreme Court Chief Justice John Roberts who wrote the majority opinion striking down provisions of the Voting Rights Act of 1965 that was a direct result of the original march in Selma.

Why the Fox regulars regard Bush as being entitled to a place of honor at this march is a mystery. But even worse is the fact that they would feature this phony assertion of liberal media bias to the exclusion of any substantive reporting on the issues that led to the march in 1965 and the importance of its 50th anniversary this weekend.

This is typical of Fox’s perverse editorial stance on civil rights issues. On their Fox News Sunday program they hosted Kimberly Strassel of the Wall Street Journal (another brick in Rupert Murdoch’s media empire) who complained that Obama called for renewal of the Voting Rights Act. Just to be clear, she was against talking about voting rights in a speech commemorating an historic march for voting rights. Also notable is that Fox News failed to mention that not a single member of the current leadership in Congress attended the anniversary event in Selma.

And yet, Fox found time on multiple programs to gripe about a non-story concerning the cropping of a photo that never happened. That’s what Fox regards as newsworthy. And everybody knows that civil rights begin with exalting white Republicans who never did a damn thing to advance them.