Today marks the official start of the Republican Presidential primaries. First out of the Clown Car is freshman Texas senator Ted Cruz. As the first candidate to announce, Cruz is bucking the odds where electoral history records that no candidate who announced first has prevailed since 1952. 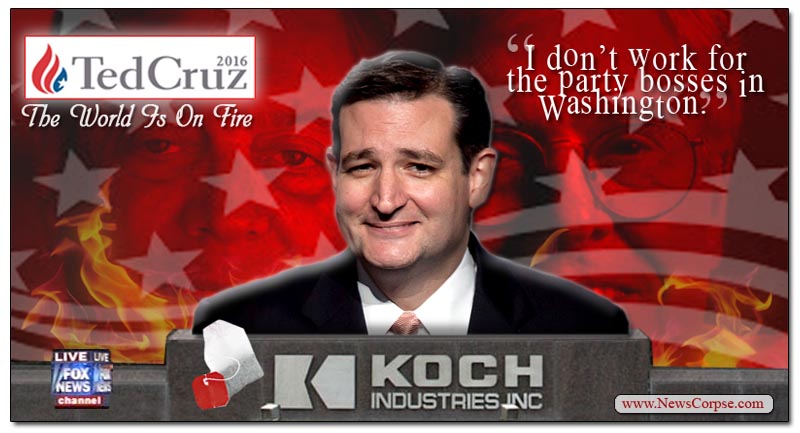 Cruz has bigger problems than a statistical curse. His popularity in a large field of contenders is decidedly weak. Coming in at eighth in the RealClear polling average, he is trailing outliers like Ben Carson and Chris Christie. And he is also near the bottom of the pack in a match-up against Hillary Clinton, losing to the prospective Democratic nominee by double digits.

He’s a candidate without a portfolio. After all the harping by conservatives about whether President Obama was lacking experience when he ran for president, they are now being asked to support someone with even less experience. Although both were senators for only two years when they ran, Obama spent seven years in the Illinois state legislature prior to becoming a senator. What’s more, the same crackpots who insisted that Obama was not qualified to be president due to their delusional claims about his birthplace and communist upbringing, don’t seem to have any problem with Cruz, who was born in Canada to a Cuban father who fought alongside Fidel Castro.

The irascible Cruz’s tenure in the senate is fraught with controversy. Even his Republican colleagues were embarrassed by his attempt to shut down the government with a filibuster that featured a reading of “Green Eggs and Ham.” Likewise, Cruz angered his peers when his greenhorn maneuvering permitted Democratic Leader Harry Reid to get confirmations for two dozen Obama appointees that would have otherwise been bypassed.

On policy Cruz is as far to the right as one can get. He has never seen a war or military escalation he didn’t love. He is a science denier who rejects both Climate Change and evolution. He opposes immigration reform, marriage equality, raising the minimum wage, and abortion even in cases of rape or incest. He voted against reauthorizing the Violence Against Women Act. He would demolish the wall of separation between church and state. He has made repealing “every word” of the Affordable Care Act (aka ObamaCare) a centerpiece of his platform, despite the fact that it would explode the deficit and cause millions of Americans to lose their health insurance.

In his public statements, Cruz has been less than credible. Aside from having an overtly hostile personality that disrespects his opponents and their offices, his track record for honesty is dismal. PolitiFact has rated two-thirds of his statements as “Mostly False” or worse. That’s a lower percentage than all of the other main GOP candidates.

The good news (or bad news depending on your appreciation of political comedy and/or absurdist performance art) is that Cruz has almost no chance of winning the Republican nomination. He may rise to the top of the heap briefly as almost all GOP contenders do (see Michele Bachmann, Herman Cain, Sarah Palin, Rick Perry, Newt Gingrich, Donald Trump). But he cannot prevail over the more establishment oriented Jeb Bush or Scott Walker. He is the poster boy for wingnut conservatism. And he is bought and paid for by the Koch brothers, although he is not the lone Republican with that distinction. Walker, Marco Rubio, and Rand Paul all appeared with Cruz at a recent Koch-fest to plead for their anointing. But it was Cruz who went the extra distance by praising his hosts becuase they “stood up for free-market principles and endured vilification.”

In his announcement speech, Cruz hit on all of the cliche right-wing drool enhancers: America uber-alles, God-centered government, and Ayn Randian self-interest in all matters. He spun his personal biography as a child of immigrants, whom he hopes to prevent from achieving the same American dream that his family enjoyed.

He basked in the warm reception he received from the captive audience at Jerry Falwell’s Liberty University where the announcement took place. [Update: The students were required to attend or be fined] It was an appropriate venue for the sanctimonious son of a fire-and-brimstone evangelical preacher who truly believes that the world is on fire already. Which may explain his campaign logo: An upside flag that is aflame. And his announcement PR continues tonight on (where else) Fox News as he canoodles with Sean Hannity for the full hour.

4 thoughts on “The World Is On Fire: Ted Cruz Ignites The GOP Presidential Primary Season”