The presidential electoral season is rapidly heating up with candidates for both sides jockeying for position. Most of the activity is on the Republican side as the Democrats have not yet fielded a candidate that is seriously challenging Hillary Clinton.

The list of Republican hopefuls is long and comical, including such farces as Ted Cruz, Donald Trump, and Ben Carson. Those considered “establishment” contenders like Jeb Bush and Lindsey Graham have been rejected outright by the Tea Party base. Consequently, there is a sucking vacuum of emptiness in the GOP that threatens to sink their 2016 aspirations before they even get started.

Given the lack of any candidates that can unite the party and generate the energy and passion necessary to win next November, the GOP is casting a wider net in search of a more palatable offering. The consensus among insiders in the party is that Israels’s Prime Minister Benjamin Netanyahu best fits the bill to fire up a demoralized GOP that has lost two straight elections to a black guy. 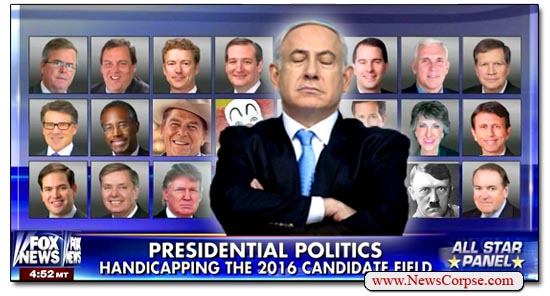 That makes the recent travels of Republican leaders to Israel a more significant news story than previously disclosed. Mitch McConnell, the GOP chieftain in the Senate was there last week and huddled with Netanyahu, taking his side against President Obama regarding the sensitive negotiations over Iran’s nuclear arms capabilities. Next up is John Boehner, the GOP Speaker of the House, who is also scheduled to fluff Netanyahu during a trip to the holy land. These trips, it turns out, were not solely excursions to attempt to embarrass Obama on an international stage. Sources in the GOP have revealed that they were arranged to recruit Netanyahu as the next Republican nominee for president of the United States.

While there would be some obstacles to a Netanyahu candidacy, there are also some distinct advantages from the Republican perspective. Netanyahu is a war hawk who gives American conservatives goose bumps when he talks about escalating hostilities in the already volatile region. He has demonstrated a total inability to manage his nation’s economy, which should also excite Republicans who have made that their trademark in the United States. And best of all, he hates President Obama with a passion that comes very close to that of the Tea Party right in America.

The question of his citizenship is expected to be buried in a campaign that emphasizes his strong personal character that has the divine power to overcome trivialities like constitutional law. Republicans are planning to flood the media with arguments of equivalency to Obama’s Kenyan nativity and even to Ted Cruz’s birth in Canada to a Cuban lieutenant of Fidel Castro.

The religious right has long been one of the most powerful and loyal constituencies in the GOP. Their influence in this can also be felt as they regard a Netanyahu presidency as a prelude to the End Times that they so fervently await. They see his ascendancy as a path to war in the Middle East and eventually to the Apocalypse.

Fox News is also on board as the network of Christian soldiers who believe that a return to the Crusades would benefit both their political goals and their ratings. With a roster heavily weighted by devout Catholics, they are the closest thing in media to a Vatican PR office. The Fox faithful include: Bill O’Reilly, Sean Hannity, Megyn Kelly, Bret Baier, Bill Hemmer, Brian Kilmeade, Andrew Napolitano, Jeanine Pirro, Laura Ingraham, Dennis Kucinich, Elisabeth Hasselbeck, and Father Morris. Rupert Murdoch, the CEO of Fox News parent News Corp was himself inducted into the “Knights of the Order of Saint Gregory the Great” by Pope John Paul II. And if that isn’t enough, the current Senior Communications Adviser in the Vatican’s Secretariat of State, Greg Burke, was previously the Fox News correspondent covering the Vatican, a position he held for ten years.

No timetable has been set as to when Netanyahu would announce his candidacy. However, there doesn’t seem to be any hurry as their is only one announced candidate to date (Ted Cruz) and no one is taking him seriously. The first debate (on Fox News, of course) isn’t scheduled until August. That gives Netanyahu time to settle his affairs in Israel and make several trips to Iowa and New Hampshire. Historically, campaign announcements have not been made on or around April 1st for the obvious reason: That it is simply too early in the cycle.

6 thoughts on “Ready For Bibi: Republican Leaders Trying To Draft Netanyahu For President In 2016”