The cable “news” network that is number one with racists has become a partner with some of the most vile white supremacist organizations in a campaign to intimidate and malign a college professor in Arizona. Fox News was the first national media outlet to condemn a course at Arizona State University called “U.S. Race Theory & the Problem of Whiteness,” and their hostility has inspired a crusade of bigotry. 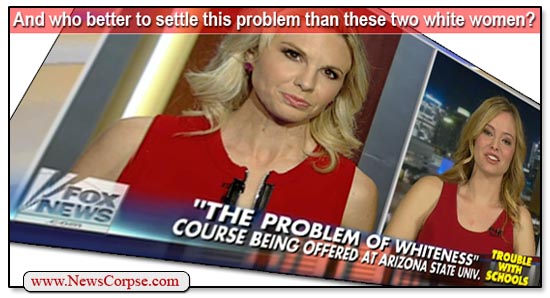 The course itself is a non-controversial exploration of race and the privileges of the majority. It is not, as Fox News characterizes it, an attack on white Americans. Part of the purpose of college is to get an expanded perspective of the world and to challenge preconceptions. However, Fox attacked this class based on nothing more than its name. They did no investigation into the actual curriculum. Having been alerted to the issue by an extremist right-wing organization, Fox’s Elisabeth Hasselbeck led the outcry by stating on Fox & Friends that the class was “unfair and wrong.” She provided no support for her criticisms.

Subsequent to the “reporting” on Fox, the professor involved became the target of an organized campaign of hate. USA Today reports that…

“According to university records recently obtained by The Arizona Republic, assistant professor Lee Bebout has received dozens of hostile and hate-filled e-mails about the class, and Tempe police say the instructor suffered harassment when fliers were distributed on campus and in Bebout’s neighborhood with ‘Anti-White’ printed over a photo of Bebout, who is white.”

Beginning on the day the segment aired on Fox, Bebout began receiving hate mail and threats that contained overtly violent rhetoric. For instance, one letter said “I look forward to your suicide,” and another wrote “I’d enjoy seeing you swing from a light pole.” The fliers were labeled “National Youth Front,” which describes itself as a “youth organization dedicated to the preservation of all White people.” Further escalating the imminent risk of harm, Bebout’s photo was posted on white supremacist websites along with those of his family, his contact information and other personal details.

Hasselbeck’s segment on Fox & Friends featured an interview with Lauren Clark, an ASU student who did not enroll in the class. Clark is also a representative of a group called Campus Reform, whose mission is to expose liberal “bias and abuse on the nation’s college campuses.” It is a project of the ultra-rightist Leadership Institute (LI). Other alumni of LI include Karl Rove and James O’Keefe. Their funding comes from a narrow cabal of conservatives including the Heritage Foundation and the Koch brothers.

Clark alleged that the course was inappropriate because it “suggests an entire race is the problem.” How she came to that conclusion without taking the class, or ever talking to the professor, can be easily explained by her obvious ideological prejudices. In truth, the class is described by the university in a statement that says that it…

“…uses literature and rhetoric to look at how stories shape people’s understandings and experiences of race. It encourages students to examine how people talk about — or avoid talking about — race in the contemporary United States.”

This is precisely the sort of discourse that enriches the academic experience and benefits students. But Fox News distorted it to turn it into a racial controversy. They did this without the slightest bit of research or factual basis. They supported their false assertions with the help of a representative from an openly biased organization who was equally uninformed as to the facts. And the result was a campaign of threats and intimidation aimed at the Arizona school and the teacher by national white supremacists.

This was a foreseeable series of events thanks to Fox News and their openly bigoted agenda. It was something that could easily have been avoided with a little research. But Fox never conducted an investigation, never sought to get a response from the school or Prof. Bebout, and never disclosed the biases of their Koch brothers-funded guest. In short, they did none of things that an actual journalistic enterprise would do. Is anyone surprised?