The controversy over Indiana’s so-called “Religious Freedom” law, that effectively gives permission for businesses to discriminate against LGBT persons, continues to divide the state and the nation in much the same way as civil rights battles in the 1950’s and 60’s did. And despite attempts on the part of Gov. Mike Pence to deny that the bill allows legal discrimination, the truth keeps leaking out.

Over at Fox News the anchors and their guests are arguing non-stop that Christians must have the ability to turn away any customer who they decide conflicts with their faith (although they haven’t ever mentioned any objections to divorcees or fornicators or murderers). Even Fox host Tucker Carlson admitted that the law doesn’t “make any sense” if amended to prohibit discrimination. If the bill does not legalize discrimination, then how can an amendment prohibiting it mean that “the law has been completely gutted,” as Carlson said this morning on Fox & Friends?

What began as a side note to this story, however, has ballooned into a remarkably prominent and emblematic theme. Memories Pizza, a small restaurant in Walkerton, Indiana, told a local news reporter that they would refuse to provide service to a gay wedding. That expression of open bigotry resulted in an outcry of criticism from people who value civil rights. As a result, the proprietors of the pizzeria claimed that they had to close their doors for a couple of days.

That minor hardship inspired Dana Loeesh and others at Glenn Beck’s Internet site, TheBlaze, to come to the aid of the pizza vendors by posting a plea for help on the personal charity site, GoFundMe.com. Astonishingly, donors pour in $842,387 in less than two days. In other words, the folks at Memories Pizza have turned a weekend off work into a windfall that exceeds what they would have made in more than a decade.

It is absurd to think that these confessed bigots deserve that kind of reward for their open expression of hate. And to put this further into context, the GoFundMe site links to other postings in the same region. The first five following Memories Pizza were all worthy causes for people suffering real hardships. But they have not received anywhere near the amount of support that the pizza vendors got for being hateful cretins. For example (see also graphic below)…

Scheidler Family House Fire Fund
At 1 am Sunday morning on March 29th, our friend, Nicole, had a house fire that caused extremely heavy damage. She is a mother of 5 young children, including a 2 month old baby, all while going to nursing school. Thankfully, they all made it out unharmed but the damage is significant. Their financial need for this is unknown as of right now but anything that we could do to help would be incredible.

Miguel’s Last Wish
Miguel is 26 years old and has two lovely kids. Out of nowhere, he complained of stomach pains and decided to go to the doctor. It was then when Miguel was diagnosed with terminal gastric cancer and was given 6 months to live. Doctors told Miguel that there was nothing to do but just wait for his time to come. Miguel is on his 6th month of having cancer and even though his condition has become very critical, he is still fighting for his life.

Justin Ehlers-Danlos Vascular Fund
My son Justin Burks is currently in critical condition on life support at the hospital due to a rare connective tissue disorder that he has. The name of this disorder is Ehlers-Danlos and he has the vascular one which is the worse one of them all. This disorder is attacking his organs; his intestines, colon, spleen, liver and lungs have all ruptured. He has made it out of three surgeries which is a blessing. If he lives through this we will need help with his medical cost and if he doesn’t we will use the funds towards his funeral.

Denny Needs A Liver Transplant
Denny has been diagnosed with cholangiocarcinoma, a form of bile duct cancer. On June 28, I noticed that Denny was very jaundice. He had no other symptoms; he was just extremely yellow. After trips to the ER and local doctors, we found ourselves at a liver specialist at IU Hospital, Indianapolis. He ordered a CT scan which found a blockage in the bile duct, between the liver and the gall bladder.

Chad’s Eye Cancer Bill Fund
The doctors said I have a Choroidal Melanoma (a cancerous tumor) in my right eye. A 16x16x7.1 mm mass that is attached to my optic nerve. Dr. Demirci informed me that there was a treatment for this cancer. A radiation plaque would be placed on the tumor for five days, giving out a small dose of radiation that should kill the tumor… but it would also damage my optic nerve.

It’s sad to see that people with serious problems are struggling to keep their lives in order while bigots are getting rich off of their prejudice. It makes you wonder if the “memories” in their business name are of segregated lunch counters in Alabama. On the other hand, the stories on these other postings are inspiring due to their heartfelt gratitude for whatever generosity they receive. Feel free to show them some love. 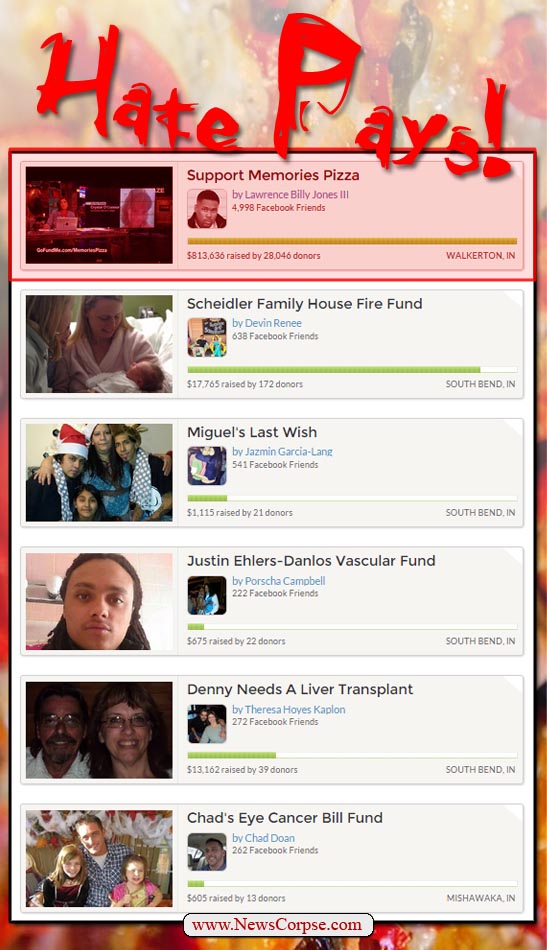 10 thoughts on “Free Market Bigotry: Or How A Pizza Parlor Profits From Prejudice”