Predicting the political biases of Fox News has never required a crystal ball or a gifted clairvoyant. Their devoted support of Republicans has earned them recognition as the PR division of the GOP. So what would have to occur to persuade Fox News to speak approvingly of a Democrat?

The events surrounding the indictment of New Jersey Senator Bob Menendez for corruption provide a rare look into the prerequisites for Fox News to stray from their Republican partiality. The specific factors that would drive Fox to defy their nature and support a Democrat become glaringly obvious in the light of the Menendez affair. 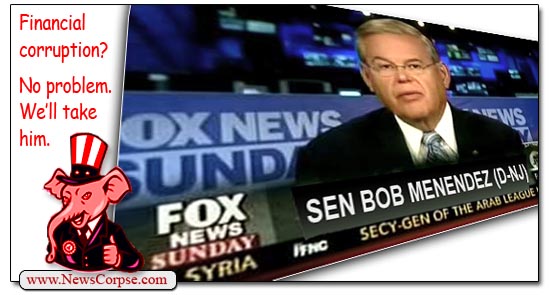 First and foremost, the opportunity to disparage President Obama is a temptation too great for Fox News to resist. Therefore, by spinning this indictment as an assault on a senator who has been critical of the President, Fox can accuse Obama of engaging in a distasteful display of political retaliation. This argument goes that the White House applied pressure to the Department of Justice to file the charges in order to punish Menendez for opposing the President on his policies regarding Cuba and Iran.

The only thing wrong with this conspiracy theory is – everything. The investigation of Menendez began years ago, long before the Cuban and Iranian issues were ever on the table. Obama would have had to know in advance that Menendez was going to defy him on these issues in the future, which even Obama’s harshest opponents would not suggest he could do. What’s more, there was no indication that Menendez would ever be a thorn in Obama’s agenda given that he has always been a loyal Democrat who voted with his party and the President 97% of the time. That places him as the thirteenth most reliable Democrat, above party stalwarts like Barbara Boxer and Harry Reid.

The notion that Obama would sabotage the career of such a loyal ally is especially absurd considering that, should he be convicted and forced to resign from the Senate where Democrats are already in the minority, New Jersey’s Republican governor, Chris Christie, would be in a position to name his replacement. So this theory requires the assumption that Obama would trade a solidly Democratic senator who voted for most of his legacy initiatives (ObamaCare, the Dream Act, disapproval of KeystoneXL, repeal of DOMA, etc.) for a Christie-appointed Republican. The only people who would buy that are still looking for the film studio in New Mexico where the moon landing was faked – and Fox News viewers.

It is not coincidental that Fox has chosen this controversial senator to hitch their wagon to. Republicans are notoriously forgiving of politicians accused of corruption. They regarded the charges against, and conviction of, former Virginia governor Bob McDonnell to be politically motivated as well. They supported the candidacy of New York congressman Michael Grimm while he was facing 22 felony counts (He was convicted after winning reelection). And three of the GOP’s current batch of governors considering 2016 presidential campaigns (Chris Christie, Scott Walker, and Rick Perry) have active investigations against them in progress. From their perspective, Menendez is just their kind of guy.

Note that this affinity for scandal-plagued pols is only valid if the scandal is related to financial malfeasance. When Menendez was accused of sexual misconduct by Tucker Carlson’s Daily Caller (among other right-wing rags), Fox News and their Republican allies were quick to condemn him. However, they failed to apologize after learning that the charges stemmed from “witnesses” who were paid to lie. Some accounts charged that the payments came from people connected to the Daily Caller. In addition to the media sources who jumped on this faux scandal, the Republican National Committee also took it up with a rather offensive anti-Menendez campaign.

Finally, it goes without saying that if the DOJ had not indicted Menendez, Fox News would be throwing a tantrum over what they would call a travesty of justice engineered by a lawless White House trying to protect one of their own. So, as usual, Fox has constructed a lose-lose scenario for the President. But anyone approaching this with a sliver of functioning grey matter would see the ludicrous assumptions that would have to be made in order to believe the Fox spin. Luckily for Fox News, their audience would flunk the “sliver of functioning grey matter” test.