Every presidential candidate has their own way of launching a campaign that seeks to highlight what they regard as their virtues. Ted Cruz did it at Jerry Falwell’s Liberty University with an audience of students that were required to attend or pay fines. Rand Paul did it at a hall named for Ayn Rand’s one-percenter hero, John Galt. Marco Rubio chose a location that is known as Miami’s Ellis Island, in case there were some voters who didn’t know that he is Cuban. All three of them made Sean Hannity of Fox News their first stop for an interview after their highly staged announcement speech.

On the Democratic side, Hillary Clinton decided to take a more low key approach that centered on her theme of listening to the voters and becoming the champion of the middle-class. So she posted an introductory video on YouTube and set off on a road trip to Iowa.

Since Fox News regards anything that any Democrat does as not merely wrong, but fundamentally evil, they struggled mightily to come up with a derogatory take on Clinton’s campaign rollout and came up with this: 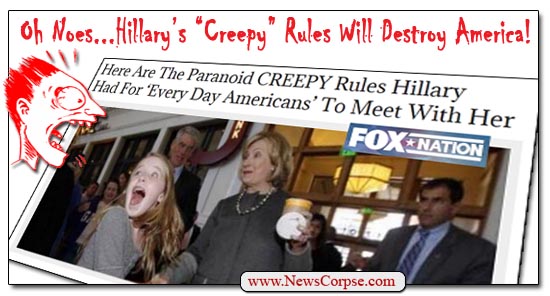 Oh my, that sounds disturbing. And it would be if any of it were true. What Fox News did on their home page for crotchety thumbsuckers, Fox Nation, is wildly distort an article published by Business Insider (BI) that merely described some of the procedures Clinton’s staff employed to maintain her privacy and that of those with whom she met. The Fox Nation version of events began with a fair and balanced declaration that…

“The results are in, and pretty much everyone agrees that the rollout of Hillary’s presidential campaign has been a disaster.”

Obviously the only people polled for that consensus were Tea Party dimwits and Rush Limbaugh’s dittoheads. The Fox Nationalists went on to claim that the BI article was revealing that “the rules have come out for being an ‘every day American’ that got to meet Hillary on the campaign.” However, BI’s reporting was confined to a single meeting that included only Democratic operatives in Iowa. It never mentioned every day Americans, despite the fact that Fox put those words in quotes. So Fox’s characterization was a complete lie.

As for the alleged creepiness of the affair, all of the attendees were not only comfortable with the prerequisites, they wholly approved of them. The rules that Fox disparaged included common precautions to keep the meeting’s details secure, such as not revealing the location until necessary and prohibiting cell phones. None of this bothered anybody. One guest said that “it was a smart thing to do [and] because they did it that way, she was able to sit and have a regular conversation.” Another said that he “appreciated that fact that I could just talk to her and, no offense, not have any of the news media there.”

In addition to the positive response of the meeting’s participants, the restaurant where it took place was likewise pleased and noted that Clinton and her staff were “very pleasant” and “very generous with the tip.” The owner told BI that…

“Clinton’s visit was also a ‘pleasure’ for the restaurant’s staff. Despite the secrecy surrounding Clinton’s stop, the restaurant was not closed to customers while she was there, Bauer said Clinton spent a good deal of time greeting diners and staff.”

Sounds real creepy, doesn’t it? Fox just happened to leave all of that out of their mucked-up version of the story. For the record, the owner was not merely being solicitous to a frontrunner for the presidency in 2016. She also told BI about a previous presidential aspirant who held an event at her restaurant:

“Clinton isn’t the first presidential candidate to visit the Main Street Café. Republican Mitt Romney held a roundtable there in 2012, and Bauer subsequently said she felt he and his entourage treated the staff poorly.”

Can anything be more creepy than the way that Fox Nation falsifies news stories in order to manipulate their famously ill-informed readers? It truly is cult-like the way they brainwash people in order to insure that nobody wanders off from the approved doctrine. It is also a sad commentary on the state of conservative media that they would resort to this and that their audience is so easily and willingly deceived.

3 thoughts on “Fox Nation vs. Reality: The Paranoid CREEPY Rules For Anti-Clinton Propaganda”