At a campaign stop in Manchester, New Hampshire, prospective GOP presidential candidate and successor to the Bush dynasty, Brother Jeb came forward to praise his own actions as Florida governor during a controversy that involved a woman in a persistent vegetative state. Terri Schiavo had suffered irreversible brain-damage and was being kept alive by machines against the wishes of her husband and, according to him, herself.

The torturous spectacle that Bush engineered included multiple court challenges and even signing a law giving him, personally, the right to decide Schiavo’s fate. Somehow that didn’t offend his Republican principles against Big Government. That law was later ruled to be unconstitutional, and after months of emotionally brutal wrangling in the courts and the media, Schiavo was mercifully allowed to die.

Today Bush still thinks he did the right thing and says that “I don’t think I would change anything.” However, he went on to express what he said was his one regret: 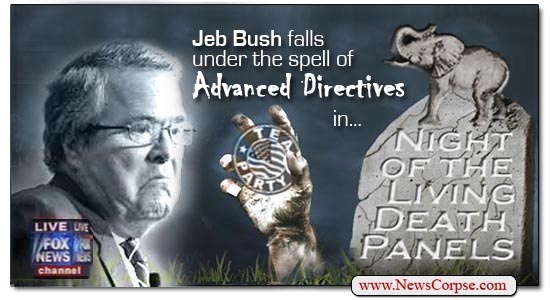 Yikes! What Bush is talking about are the dreaded “Death Panels” that Sarah Palin made famous in her blitheringly stupid criticism of the Affordable Care Act (aka ObamaCare). Advance Directives are nothing more than voluntary statements that inform doctors and family members as to the wishes of a patient in the event that they are unable to speak for themselves. Palin turned this into a surreal debate over the wholly imaginary prospect of the government deciding who will live or die. For that she was awarded the PolitiFact “Lie of the Year” honors for 2009.

Having been subjected to devastating ridicule did nothing to temper Palin’s dumbfuckery. She continues to believe in the Death Panel myth that she was so instrumental in creating (although she has shifted her ire toward the Independent Payment Advisory Board, a group of health care professionals who insure best practices in medical care and fair pricing, which she now calls Death Panels). When Palin gets wind of Bush’s endorsement of Advanced Directives there is likely to be an earthquake in the Tea Party precincts that still admire her vacuous ramblings.

As for Bush, there is reason to be positive about his support for such a common sense initiative that gives people more control over their own lives. However, he may have taken it a step too far. The suggestion that Advanced Directives be mandatory seems like the sort of government intrusion that Republicans usually rail against. While a Living Will is advisable for most people, forcing them to prepare one when they may not be ready to make all of the profound decisions involved is way too strict a requirement.

What’s more, Bush is only proposing mandated Advance Directives for Medicare recipients. Why is he discriminating against just that sector of the population? Why not make it mandatory for anyone with a health insurance policy, whether public or private? As usual, the Republican solution to any problem is to put the burden on those who are already on society’s lower financial rungs. It’s why they advocate mandatory drug testing for welfare recipients, but not for doctors or lawyers or politicians, who hold people’s lives in their hands. It’s why states like Kansas are currently trying to dictate how food stamp recipients can spend their benefits, but there are never similar dictates on how wealthy recipients of government subsidies can spend their benefits.

If you’re poor in America the government can tell you what to do and how to live. If your rich, anything goes, even if you still get benefits from the government, including tax breaks that contribute to your wealth. That’s the Republican philosophy. And then they will condemn anyone who proposes a policy that permits the government to control any part of a citizen’s life. Unless, of course, it has to with a woman’s control over own body, a patient’s desire for medicinal marijuana, or anyone who wishes to be free from mandated exposure to Christianity.

In short, the GOP Doctrine of Acceptable Hypocrisy requires that any regulation of the rich be condemned as an intolerable intrusion by Big Government. But similar regulations of the poor are necessary controls on irresponsible, and probably criminal, moochers.