A couple of recent news reports involving children who become entangled with law enforcement matters reveals a striking difference in how they are portrayed by Fox News. 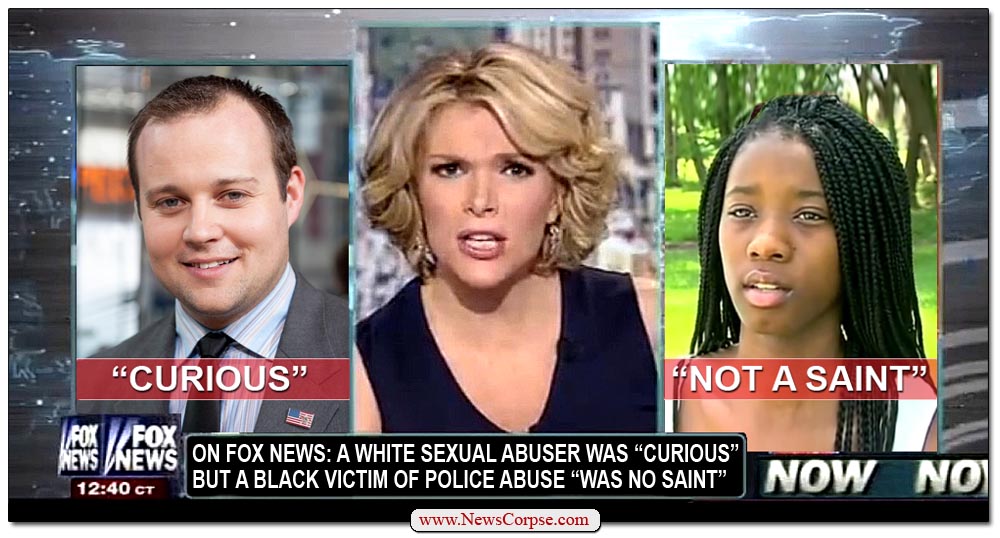 After it was discovered that Josh Duggar of the reality TV show “19 Kids And Counting” had sexually abused several young girls, including his sisters, when he was fourteen, Fox News went out of their way to avoid covering the story. There was hardly a mention of it on the network until Megyn Kelly succeeded in booking members of the Duggar family (not including Josh) for exclusive interviews. The pre-taped conversations were split up to air on two separate nights, multiplying the ratings possibilities for Kelly and Fox.

During the interviews Kelly, a lawyer prior to her work at Fox, acted more like the Duggar’s defense attorney than a journalist. She repeatedly fed Josh’s parents and sisters leading questions that contained the answers she was looking for. The Duggar family played along and joined Kelly in characterizing the controversy as a fabrication of the liberal, secular media that sought to defame their “strong Christian” family. The result was a narrative that cast Josh as “a young boy in puberty and a little too curious about girls.”

So, nothing to see here. Never mind that a budding pedophile never faced criminal consequences for his unlawful acts, nor that he never received professional counseling for a severe psychological problem that is notoriously difficult to treat and is often repeated. And never mind that the parents failed to report Josh’s behavior for a year, or that they agreed to launch a television show that delved into their personal lives knowing the awful secret they were concealing. If anyone was exploiting the media it was the Duggars on the cable show that was making them rich, and later on Fox News as they tried to salvage their slimy career.

After attending a pool party in McKinney, Texas, Dajerria Becton was caught up in one-man police rampage that resulted in her being savagely mistreated. The party dissolved as adults in attendance argued and may have fought over alleged racial slurs directed at African-American kids who were invited guests. When the police arrived witnesses reported that they targeted the black kids, ordered them to the ground, and placed them in handcuffs. Note that these were non-violent, unarmed kids who had broken no laws.

One officer in particular, Eric Casebolt, was noticeably out of control. He was chasing down kids who had done nothing wrong, and even drew his gun on a couple of boys who were clearly not threatening him or anyone else. Among his victims was Becton, a young girl in a swimsuit, who Casebolt grabbed by her hair and threw violently into the pavement. As she called out for someone to call her mother, Casebolt continued to brutalize her, forcing her face into the grass and kneeling with his full weight on her back. You have to wonder what ominous danger he thought she was capable of.

The coverage of this incident by Fox News predictably slanted toward the side of the police. And once again, it was Megyn Kelly who summarized the network’s general take by baselessly slandering Becton saying that “the girl was no saint either.” What did Kelly regard as her sinfulness that justified the beating she took? The only thing Kelly mentioned was that Becton was told to leave the area and she didn’t immediately do so. Apparently Fox News considers that a sufficient crime to warrant throwing a child onto concrete by her hair and pinning to the ground.

Juxtaposing these two incidents, both involving fourteen year old kids, puts the repulsive biases of Fox News on display. It is inconceivable that a rational person would defend the young Josh Duggar as a curious, but essentially good kid who simply made some mistakes, while condemning young Dajerria Becton, who did nothing wrong, as a sinful delinquent who deserved what she got. Yet somehow, Fox News still regards itself as the spokes-network for conservative values including personal responsibility. I suppose they just mean personal responsibility for African-Americans, not white, right-wing Christians.

62 thoughts on “On Fox News: A White Sexual Abuser Was “Curious” But A Black Victim Of Police Abuse “Was No Saint””