There are times when one encounters political punditry that makes you genuinely question the mental health of the alleged pundit. One of those times is at hand with today’s article by Breitbart News editor John Nolte titled “Break ObamaCare’s Back: Do Not Purchase Health Insurance.” 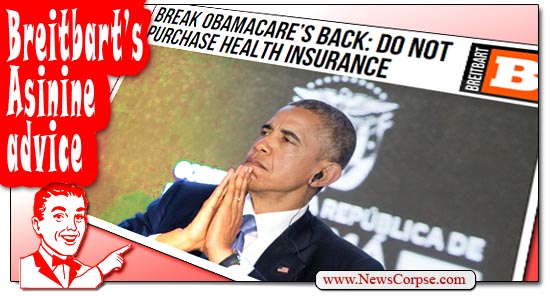 BreitBrat Nolte is offering this blitheringly stupid advice to his dimwitted readers based on a series of falsehoods and a fetishistic aversion to the availability of effective, affordable health insurance. He begins his rant by revealing some personal reasons for putting his health – physical and financial – at severe risk.

Nolte: Running around uninsured for the first time in my adult life has not been easy. The tax penalty isn’t cheap (2.5% of your taxable income) and there is the constant uneasy fear of an expensive medical problem, a cancer or car accident, the kind that can bankrupt you.

“History has shown, though, that there is almost always a personal price to pay for social change through civil disobedience — a price I’m willing to pay to help break the back of ObamaCare, an immoral and illegitimate government program sold with serial-presidential (and media) lies and enacted into law using one-party procedural tricks.”

Nolte is portraying himself as the Gandhi of the anti-healthcare movement. He thinks he is taking a principled stand to save America from having to suffer the torment of access to doctors and medicine. But to him the the sword dangling over his head is worth the risk if it can contribute to forcing everyone in the country to face the same risk he is foolishly assuming voluntarily.

In his first attempt to provide a substantive reason to forego healthcare, Nolte praised pre-ObamnaCare policies that he ludicrously described as “these wonderful catastrophic policies.” Now there’s a turn of phrase that cries out “oxymoron.” Nolte has to be the only person who has ever had a catastrophic policy who thinks it was “wonderful.” The rest of the world regards them as a last resort and prays that they don’t get sick.

Even so, Nolte’s praise of these wonderful policies comes with the criticism that President Obama made them illegal. But then, in his very next sentence, he contradicts himself saying that “Actually, what ObamaCare did was make these catastrophic plans unaffordable.” He’s still wrong. Nolte’s evidence of this was his assertion that he would have to pay close to three times more were he to get a catastrophic plan through ObamaCare. However, he offers no proof of that claim and his numbers are utterly unbelievable. He says that he would have to pay a premium of $400.00 per month, but the average cost of a Bronze plan under ObamaCare is only $209.00.

Nolte goes on to claim that his out-of-pocket costs would increase because providers offer lower fees to people without insurance. However, they provide the same discounts to people with high-deductible insurance plans. Plus, many preventive services (annual exams, vaccinations, colonoscopies, mammograms, etc.) are paid in full with deductibles waived.

The real motivation for Nolte’s tirade is stated when he writes “I want to do my part to break the back of ObamaCare. I just can’t live with the idea of doing anything that will benefit Obama’s and the media’s serial lies.” Nolte is admitting that his agenda is political, and not based on his best medical interests. He is simply opposed to the “greedy takers enjoying these subsidies.” That tells you something about how he feels about low and middle-class Americans seeking access to health care.

Nolte closes by misrepresenting the public’s view of ObamaCare. He cites a recent poll by the Washington Post that shows 54% opposed and 39% in favor. But Nolte is leaving out a lot of pertinent information. For instance, the Post admits that their results “contrast with other recent polls finding softening opposition and support above record low levels.” What’s more, the Post survey also shows that a similar majority (55/38) say that the Supreme Court should not rule against the ObamaCare subsidies in the King v. Burwell case that is presently being decided. That includes 65% of Democrats, 57% of Independents, and even 34% of Republicans.

Another thing that ObamaCare opponents frequently use to misconstrue public opinion is the fact that many of those who say they oppose ObamaCare do so because they think it doesn’t go far enough. When the numbers for those who favor ObamaCare are combined with those who want it to be even more comprehensive (i.e. universal, single payer), they are a solid majority.

The right’s crusade to sabotage ObamaCare is nothing new. They have been trying to kill it since before it became law. That campaign has included brazenly lying about the law’s effects, including ancillary nonsense like threats of prison for those who don’t sign up. PolitiFact has ruled at least twelve times on “Pants on Fire” lies by ObamaCare opponents bent on scaring people away.

But what Nolte is doing is much worse. He is giving his personal advice to go without health insurance. That could lead some people to suffer terrible consequences should they become sick or injured and not have the ability to seek medical care. And even if they do get treatment, they could be find themselves in a financial morass that could leave them bankrupt or homeless. This is something that conservatives have tried before. Fox News even advocated what they falsely called alternatives to health insurance, but were mostly shams that failed entirely to cover people for real-world needs.

These attempts to steer people away from health care are irresponsible and dangerous. And whether it is Fox News or John Nolte or any other partisan hack, they should be held accountable for the harm they cause. And there are real victims like this guy and this guy, and even this guy.