The ratings troubles on MSNBC have been the subject of much hand-wringing by executives at the cable network and their corporate bosses at Comcast/NBCUniversal. In an attempt to reverse the downtrend MSNBC canceled Ronan Farrow and Joy Reid, moving anchor Thomas Roberts into those time slots. That left an opening in Roberts’ old program, “Way Too Early,” that precedes “Morning Joe.” It appears that Joe Scarborough has now assumed control of his lead-in which is leaning more toward his conservative brand of politics. And that is evident by the person currently anchoring the early show. 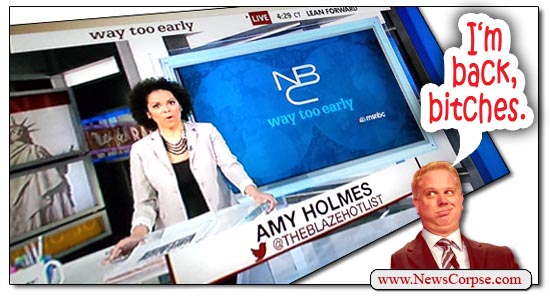 That’s right – Amy Holmes has been at the helm of Way Too early all this week. For those unfamiliar with her, she is host of a program called “The Hot List” that is part of Glenn Beck’s Internet media venture TheBlaze. Prior to that she was a speechwriter for Bill Frist, a former senator from Tennessee and Republican majority leader.

Giving Holmes this high profile spot as a “news” program anchor is a disturbing step toward the sort of wingnut media that even Fox News couldn’t handle when they fired Beck. Now Beck’s fringe media has a foothold on what has been regarded as the “liberal” cable news network. It’s a foreboding development and one that creates suspicion as to where the new management team at NBC plans on taking the cable net.

One thing that this should put an end to is the talk that MSNBC is the liberal answer to Fox News. That has never been true, mainly because, while MSNBC was generally more progressive, it remained fact-based as opposed to the blatant lying that is the hallmark of Fox. More to the point, Fox News would never give a three hour block of airtime to a liberal ex-congressman, but Scarborough not only has that, but is also featured on NBC’s Meet the Press. Just imagine if Fox & Friends was hosted by Anthony Weiner. [Note: Scarborough also left office amid controversy over the death of intern Lori Klausutis]

Putting Holmes in the anchor chair on MSNBC is the equivalent to replacing Sean Hannity with Rachel Maddow. Fox would never consider such a thing. Even though Fox pretends to be fair and balanced, their schedule is rife with right-wingers and former GOP operatives. There are even four candidates for the Republican primary for president who are former Fox News employees (Mike Huckabee, John Kasich, Rick Santorum, and Ben Carson). And now Glenn Beck’s voice is being heard daily on MSNBC to balance that right-wing cable news bias with some crackpot, conservative, evangelist bias. If MSNBC thinks that this is going to help their ratings, they are sorely mistaken.

5 thoughts on “Glenn Beck Returns To Cable News – On MSNBC? (Sort Of)”