The relentless punditry being applied to the McKinney pool party by less than credible media commentators has produced a flood of useless blathering that contributes nothing toward understanding the situation. And leading the pack as, as usual, is “doctor” Keith Ablow, the disgraced Fox News “psycho” analyst best known for diagnosing President Obama as an anti-American sociopath.

On yesterday’s episode of Fox & Friends (video below), Ablow chimed in on the McKinney affair with his familiar fetish for finding the President at fault for everything from the Kennedy assassination to diaper rash. He also exhibited his famous hate-focused tunnel-blindness that stretches the boundaries of hypocrisy to new extremes. This exchange with fellow defamer Elisabeth Hasselbeck covered well-worn territory for the Fox irregulars.

Hasselbeck: What is the mentalitiy a cop needs in a situation like this and why are so many people quick to reject authority right now?
Ablow: I think that some leaders in America have fractured the trust that Americans placed, properly, in police officers […] I don’t think our president or our former attorney general did anything to help people out when they seemed to side with folks other than the police or, for that matter, the mayor of New York. So, these messages are very powerful. And they’re heard by young people who may think of it as a cause celebre to sort of resist police officers when the right thing to do is…do as you’re told.

So it’s “some leaders in America,” specifically President Obama, who are responsible for fracturing the trust placed in police officers. It wouldn’t be the police officers who have murdered unarmed kids or brutalized peaceful citizens who made trusting law enforcement so difficult, would it? And if an enraged cop drags you by your hair and orders you to put your face in the grass, just do as you’re told. If only our leaders excused and supported such violent tactics by militarized police departments, there wouldn’t be any problem at all.

Ablow’s assertion that the President, or any other national figure, is advocating disrespect for the police is a figment of his perverted imagination. Most rational observers would hold that siding with folks other than police who act criminally IS siding with the police. It’s siding with the majority of officers whose reputation is shredded by the bad apples. But Ablow’s opinion that there is a breakdown in the social compact between citizens and the police is shared by his colleagues at Fox. For instance…

O’Reilly: It’s clear that there is a growing disrespect for police officers in some American neighborhoods and that attitude is going to lead to violence. If citizens don’t obey the police then law and order completely breaks down. 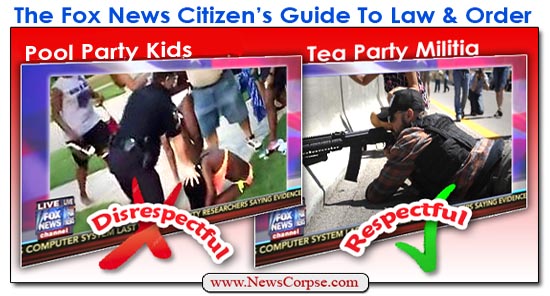 What makes these remarks all the more absurd is the inference that victims of excessive force by the police are themselves responsible for their injuries (or deaths). All they had to do was obediently comply with the abusive cops and they would have been fine. After all, it’s just a matter of respect for authority. The kind of respect that Cliven Bundy and his Tea Party terrorists showed when the authorities arrived to enforce the law and prevent him from continuing to unlawfully graze his cattle on land that did not belong to him.

For some reason, conservatives, and pundits at Fox News, considered Bundy a hero for defying law enforcement. Bundy’s Tea Party Militia came armed to the teeth and threatened to blow away any dirty copper that tried to make Bundy obey the same laws to which every other American is subject. Maybe if the teenagers at the pool party waved American flags, pointed automatic weapons at the police, and threatened to kill them, their respect would have been more appreciated by the “patriots” on Fox News.