Democratic presidential candidate Hillary Clinton delivered a speech today in New York at a rally of thousands of excited supporters. It was the first major event since the declaration of her candidacy. The speech covered many of the issues that are uppermost on the minds of American voters including the economy, national security, immigration, climate change, and civil rights. But that didn’t stop Fox News from narrowing the scope of their perception of the speech to a single divisive concept: Class Warfare. 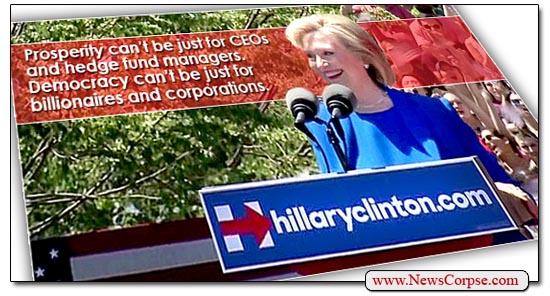 It is notable that Fox did not air a segment analyzing the speech for about twenty minutes after it was over. That contrasts with the other news networks who immediately brought in analysts to discuss the substance and impact of the speech. It appears that Fox needed some time to decide how they would frame the speech and the speaker in the most unflattering way before committing to covering it.

When Fox did come back to the subject of Clinton’s address, they first interviewed their own media reporter, Howard Kurtz, whose response was lukewarm and devoid of any insight. Then Fox let a couple of pundits spar over Clinton’s event in Crossfire fashion. Finally, after stalling for more than an hour, anchor Uma Pemmaraju introduced conservative pollster and GOP “word doctor” Frank Luntz to lead a segment with the pejorative premise that “Hillary Clinton [is] really playing up the class warfare theme” and that “She’s taking this hard-left turn.” It’s the sort of typical wild swing that Fox News uses to fan the embers of anti-liberal cliches when they haven’t got any coherent argument to make.

Clinton’s full 45 minute speech was actually much more diverse as she offered some personal stories about herself and her family, along with a platform of “four fights” that she intends to lead as a candidate and a president:

It was likely the “first fight” that triggered the criticism that Clinton was engaging in class warfare. It’s funny, though, that economic policies that favor the wealthy are never called a class war until the people start fighting back. As Bernie Sanders recently said, redistribution of wealth has been going on for decades, from the poor and middle-class to the rich. Policies aimed at reversing that trend are merely to bring back some fairness.

It was that “fourth fight,” however, that produced some of the most striking rhetoric in the speech. Clinton insisted that “Prosperity can’t be just for CEOs and hedge fund managers. Democracy can’t be just for billionaires and corporations.” She made a good case for reform that would restore the the ideals of democracy that have withered at the hands of corporations, billionaires, and the politicians they’ve bought:

We have to stop the endless flow of secret, unaccountable money that is distorting our elections, corrupting our political process, and drowning out the voices of our people. We need Justices on the Supreme Court who will protect every citizen’s right to vote, rather than every corporation’s right to buy elections. If necessary, I will support a constitutional amendment to undo the Supreme Court’s decision in Citizens United. I want to make it easier for every citizen to vote. That’s why I’ve proposed universal, automatic registration and expanded early voting. I’ll fight back against Republican efforts to disempower and disenfranchise young people, poor people, people with disabilities, and people of color. What part of democracy are they afraid of?

As the campaign season heats up Fox News will predictably try to frame Clinton, and all Democrats, as evil, socialist, godless, incompetents. But it will useful to remember what they were saying about Clinton before they decided she was the next anti-Christ. Here’s a sampling that was compiled by Media Matters: