Everyday there is more and more evidence that the Republican Party is dissolving into the ether of a new political atmosphere. It began with Fox News usurping the PR responsibilities of the party. For anyone to advance in the GOP they had to go through Fox News. At the same time, the Koch brothers have been moving in on party operations and raising more campaign money than the party could ever hope to. 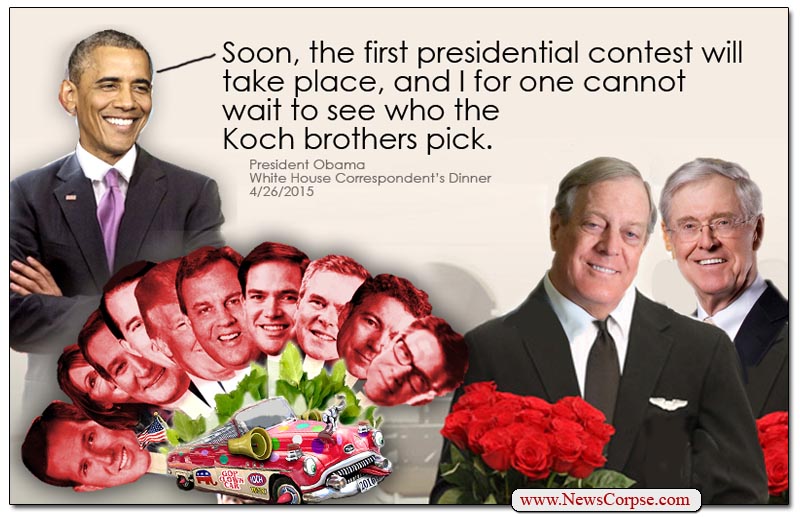 News Corpse has covered this phenomenon in some detail here and here, examining how the interests of Fox News came to supersede those of the GOP:

Fox has corralled a stable of the most disreputable, unqualified, extremist, lunatics ever assembled, and is presenting them as experts, analysts, and leaders. These third-rate icons of idiocy are marketed by Fox like any other gag gift (i.e. pet rocks, plastic vomit, Sarah Palin, etc.). […] The problem is that by elevating bona fide nutcases, they are debasing honest and informed discourse. The mental cases are crowding out any reasonable voices that might exist amongst the more moderate Republicans (if there are any left). Fox appears to have made a tactical decision to permit the inmates full run of the asylum. […] So even as this helps Rupert Murdoch’s bottom line, it is making celebrities of political bottom-feeders. That can’t be good for the long-term prospects of the Republican Party.

The trend is accelerating as we go into the 2016 presidential campaign season. Now Fox has appointed itself the gatekeeper of the GOP primary, wherein they will only permit the top ten Republican candidates, as determined by certain unnamed polls, to participate in their televised debates. Even Republican party operatives are opposed to this power grab by a media company.

In addition to Fox News assuming the roll of party spokesman, the billionaire Koch brothers are angling to replace the party’s electoral architects by building and distributing the voter access tools and outreach capability that used to be the sole province of the political party. Yahoo News published an in-depth investigation that shows how the Koch’s syndicate has moved in on party territory, much to the consternation of the party chieftains.

“The RNC is now openly arguing, however, that the Kochs’ political operation is trying to control the Republican Party’s master voter file, and to gain influence over — some even say control of — the GOP.

“‘I think it’s very dangerous and wrong to allow a group of very strong, well-financed individuals who have no accountability to anyone to have control over who gets access to the data when, why and how,’ said Katie Walsh, the RNC’s chief of staff.”

So if the Koch brothers end up running the electoral operations of Republican candidates, and Fox News continues its role in media strategy and execution, the only question that remains is: What’s left for the remnants of the Republican Party to do? They become an organization with no authority, responsibility, or relevance.

If they don’t take steps to reverse these trends, and do it soon, the GOP will drift into an ignoble and faded history. Ordinarily, that might not seem like such a horrible idea. But if their replacement is Fox News and the Koch brothers, we might all be better off rooting for the GOP.

14 thoughts on “What Republican Party? Fox News And The Koch Brothers Have Replaced The GOP”