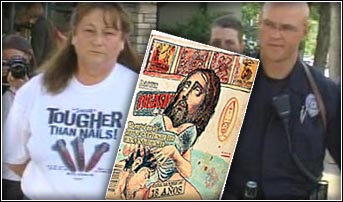 Stanford University professor Enrique Chagoya created the work entitled “The Misadventures of Romantic Cannibals.” He described the piece as a statement about religious and political institutions, not beliefs. But that didn’t assuage Folden who was arrested after she took a crowbar to the piece, shattered the glass frame, and ripped the print, while shouting, “How can you desecrate my Lord?”

Islamic jihadis around the world could be heard celebrating Folden’s act of intolerance. Her behavior was perfectly in sync with Sharia law which forbids the depiction of God. Perhaps she was inspired the Taliban, who destroyed several historic sculptures of Buddha after they assumed power in Afghanistan.

The only people praising Folden more fervently are the American Taliban of the Christian Right, along with the censorious denizens of the Fox Nation and other rightist web bunkers and culture warriors. It’s ironic because these are the same people who are so vocally defensive about the Constitution and the freedom it provides. It is these hardcore conservatives that always pretend to be so concerned about freedom of speech and religion, and the protection of private property. They are the first to condemn the censorship of artists who portray the Islamic prophet Mohammad. They say they want smaller government, but they want it to remain big enough to suppress thought and actions that they disapprove of.

Another irony is that Folden, the art mauler, was wearing a t-shirt that reads: “My Savior is Tougher Than Nails,” with a reference to Revelations 1:18. Apparently nails are no match for her savior, but paper hanging on a wall is a mortal threat.

Folden’s ill-conceived vandalism is not going to further her cause. More likely it will make a media star of Mr. Chagoya, and enhance the demand for his work. (I wish some nutcase would slash up some of my work). Furthermore, her disgraceful intolerance serves as a case study for what we can expect if we allow that brand of fundamentalism to become entwined in our cultural and legal institutions.

So thank you, Ms. Folden, for demonstrating so clearly the sort of repressive, small mindedness our nation seeks to avoid. Thank you for being a repulsive and ignorant jerk whose stupidity will set back the efforts of other neanderthals like yourself. Thank you for helping an obscure artist gain some much needed attention. Your court-ordered compensation to the artist and the gallery will also be welcome, I’m sure. And no doubt society will benefit from your incarceration. Thanks again, goodbye, and good riddance.

7 thoughts on “The Art Critics Of The American Taliban”