The new Prince of the Bush Dynasty is succeeding in stealing back some of the limelight that Donald Trump has been hogging. However, Jeb Bush’s method of getting attention may not be the most effective in terms of gaining respect. In the same interview where Bush revealed that he thinks Americans are not working enough, he also expressed his disdain for “sophisticated” communication:

“You don’t have to be the world’s policeman, but we have to be the world’s leader — and there’s a huge difference. This guy — this president and Secretary Clinton and Secretary Kerry – when someone disagrees with their nuanced approach, where it’s all kind of so sophisticated it makes no sense. You know what I’m saying — big-syllable words and lots of fancy conferences and meetings — but we’re not leading, that creates chaos, it creates a more dangerous world.”

Oh my, Matilda. The prezdent uses them long words what make chaos. It’s all parta his socialismic plot. 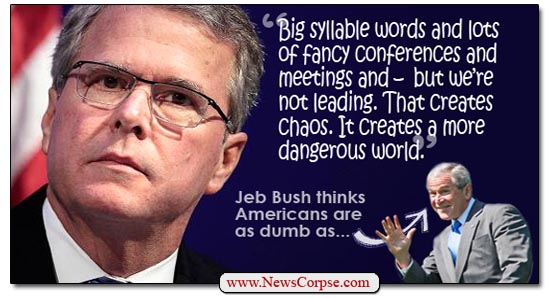 The problem with Bush’s criticism of President Obama et al, is that it affirms what can only be described as the aspirational ignorance (sorry for all the syllables, Tea Partyers) of the GOP. There has long been a deliberate objective within the conservative political sphere to literally dumb down their discourse to appeal to a constituency for which they obviously have little respect.

This could be traced back to Ronald Reagan’s fist-shaking demand that “Mr. Gorbachev, tear down this wall,” which today is regaled by fans as soaring oratory on the scale of Churchill’s “blood, sweat, and tears.” In fact it’s more akin to an old man bellowing at the neighborhood kids to get off his lawn. If Reagan had been FDR he would have settled for “Just stop fearin’ y’all.”

Jeb’s aversion to being articulate seems to run in the Bush family. His brother George is famous for his verbal gaffes and low-brow manner of speech. What’s worse, he actually regards under-achievement as a virtue. Part of a commencement speech he gave included this inspirational message: “To the C Students I say, you too can be President of the United States.” A similar message of intellectual lethargy was conveyed in a commencement address by Rick Perry who said “I’m very proud to tell you I graduated in the top 10 of my graduating class – of 13.”

Academic achievement and critical thinking is not particularly valued among some of the other current Republicans aspiring to the White House. Scott Walker is a college dropout. Rand Paul is a serial plagiarist. Harvard law grad Ted Cruz thinks the Supreme Court is too political, so the judges should be subjected to political reconfirmation votes. Chris Christie’s idea of adult discourse is to tell people to “sit down and shut up.” Ben Carson thinks that ObamaCare is the worst thing since slavery. Donald Trump just tweeted that he had 20,000 people in a hall that only fits 4,100 (He has since deleted that tweet). And of course, Bobby Jindal is the guy who coined the phrase “The Stupid Party” in reference to the GOP. Apparently he knows of what he speaks.

Remember also that Republicans are opponents of education in general. They oppose increased funding and anything that benefits teachers. They are fiercely anti-science. They cannot agree that evolution is a valid theory or that Climate Change is actually occurring, despite all of the scientific evidence for both. They advocate teaching so-called creation science in public schools. They are a party that has open disdain for the high-performing Ivy League institutions that they regard as elitist. And they are strong advocates of homeschooling where no standards of education are maintained.

No wonder leading Republican candidates are so notorious for talking down to their constituents. No wonder they talk in sound bites and bumper sticker cliches. They either don’t understand more complex concepts, or they are afraid their audience won’t. Consequently, Jeb Bush has to demean Obama for using too many syllables and holding “fancy” meetings. I guess the meetings held during a Bush administration would be dominated by coloring books and nap time. Why waste energy with boring and complicated discussions about international law and treaties? That sort of advanced intelligence doesn’t sit well with the right-wing electorate.

Nor does it work for viewers of Fox News, who are treated to a 24/7 barrage of painfully ignorant and dishonest propaganda. That’s a sad fact that was hilariously explained by Monty Python’s John Cleese, who offered a brief description of the Dunning-Kruger effect wherein stupid people are too stupid to realize how stupid they are.