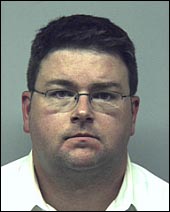 Charles Leaf of Fox News is being held in New Jersey on charges of aggravated sexual assault on a four year old girl. He has been an investigative reporter with WNYW/Fox5 in New York and has also been featured on the Fox News Channel.

This is not the first time Leaf has been accused of assault. He was previously alleged to have assaulted a councilwoman in Mobile, Alabama, where he was working at the time for a local news outlet. There were no criminal charges filed in that case, but there was reportedly a substantial settlement paid by the station.

I profiled Leaf in September in an article titled, “Charles Leaf: The New Most Repulsive Fox News Reporter.” The article details his aggressive, dishonest, and unprofessional behavior in covering real estate developers associated with the Park51 project in Manhattan (the non-mosque that is not at ground zero). The coverage, featured prominently on Megyn Kelly’s Fox News program (as well as The O’Reilly Factor, The Fox Report, Fox & Friends, On the Record, and Geraldo at Large) was based entirely on innuendo and unsupported, sensationalist, allegations. I described his reports at the time as not even providing enough evidence to start a rumor:

First Leaf conducted an ambush interview on real estate developer, Sharif El-Gamal, that yielded nothing to support his contention that El-Gamal was corrupt. Leaf merely insinuated that something must be wrong because El-Gamal was a waiter eight years prior to investing in the Park51 project. The implication being that anyone who starts a small business, works hard for nearly a decade, and achieves success, is deserving of suspicion.

Then Leaf turned his focus to investor Hisham Elzanaty. Again, Leaf ambushed Elzanaty without acquiring any usable information. The only purpose for Leaf’s ambushes is to suggest something sinister when the target declines to talk to him. To that end Leaf made wild accusations about Elzanaty’s contribution to a Muslim charity. As it turns out, the charity, the Holy Land Foundation, was later investigated for ties to Hamas. But that wasn’t until two years after Elzanaty’s donation, and the feds acknowledged that contributors would not have known about the organization’s relationship with Hamas as it was deliberately concealed.

Both of these reports failed completely to produce evidence of any wrongdoing. They were exercises in insipidness and their only purpose was to insinuate and intimidate. They were utterly unprofessional and potentially libelous. Yet Leaf exalted himself as if he had exposed Watergate. And Fox News (particularly Megyn Kelly) went along by broadcasting Leaf’s empty innuendos and affirming the unsupported conclusions.

Megyn Kelly hosted Leaf on several occasions despite never having a verifiable story to report. This is further evidence of my contention that Kelly is at least as bad as Glenn Beck. It will be interesting to see if Kelly, or anyone at Fox, follows up on their new star reporter by covering his arrest. So far, the only comment from Fox is from a spokesman at the local Fox5 station who said that they are aware of the situation and are reviewing it.

Other Fox News perverts include Bill O’Reilly who paid a multimillion dollar settlement to a former producer whom he sexually harassed, and Dick Morris who was caught sucking the toes of a prostitute whom he let listen in on phone calls to President Clinton.

Is anyone taking odds on when Glenn Beck’s mug shot will rocket through the blogosphere?