The rants of Lewis Black are brilliant because they say so much that so many of us wish we could scream. Just watching him is cathartic therapy that brings near instant relief from the insanity of the day.

So it was fortunate that I stumbled upon one of Black’s most ferocious meltdowns on The Daily Show. It was back in March of 2011, and Donald Trump was making noises about running for president. Only Black could see the merit in having Trump lead our nation with his ignoramus, third-world dictator, ego-soaked persona. 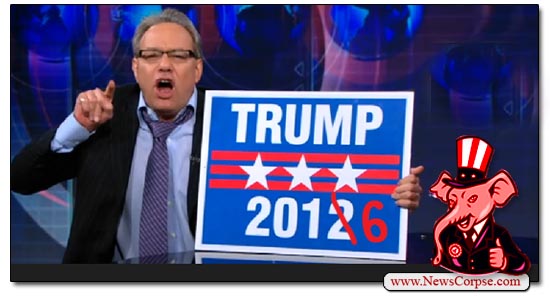 This being a slow news Saturday, I thought people could use a little uncontrollable laughter to top off the evening. The news was so slow in fact that even Fox News completely ignored Trump’s stump speech in Iowa this morning. While both CNN and MSNBC aired significant portions of The Donald live, Fox aired none of it. What do you suppose they were trying to hide? It really says something when CNN and MSNBC are more interested in exposing people to Trump’s blathering than Fox is.

Maybe it has something to do with the rift between Fox News CEO Roger Ailes and his boss Rupert Murdoch who was reported to have told Ailes to “back off the Trump coverage.” Murdoch himself posed a question in a tweet last week asking…

“When is Donald Trump going to stop embarrassing his friends, let alone the whole country?”

An excellent question. Especially coming from the potentate of Fox News. Of course the answer is “Never!” Trump has no ability, much less intention, of ceasing to embarrass himself, his party, or the country that he calls a “Hell Hole.” So without further ado, here is Lewis Black throwing his full support behind Trump. Enjoy.