Failed businessman and birther, Donald Trump, has not yet announced whether he will run for president in 2016. Of course his failure to make a decision isn’t exactly leaving anyone wondering about what it will be (or caring). He has been down this road too many times and now everyone pretty much knows that he’s just a publicity-seeking fraud. However, last night on Fox News Trump did reveal his fake campaign slogan: “This Country Is A Hell Hole.” [Video below] 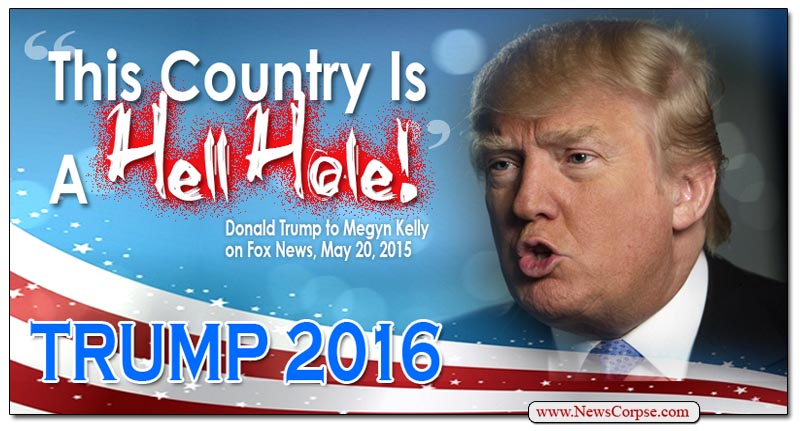 What better way to endear himself to an electorate of Fox pods who are similarly unpatriotic and harbor hateful feelings about an America that elected Barack Obama twice. These pseudo-patriots pretend to be loyal flag-wavers while constantly maligning the country and their fellow citizens who happen to disagree with them. They pretend to support the troops unless they are conducting training exercises in Texas, in which case the same soldiers are invaders bent on imposing martial law. They pretend to adhere to Christian tenets of charity and loving thy neighbor unless their neighbor is black, Muslim, or on welfare (you know how Jesus despised the poor).

And now Trump tells Megyn Kelly how he really feels about America. He’s not alone. A couple of years ago Rush Limbaugh admitted that “I am ashamed of my country.” Not long after that Sean Hannity confessed that “I am humiliated for my country”

Someone should tell these cretins that we’re not exactly bragging about them, either. As for Trump, he will never run for president for at least one unavoidable reason: Candidates have to produce financial statements. Trump won’t do that because he doesn’t want everyone to know what a loser he is (he declared bankruptcy four times). He says that he will announce his intentions next month and everyone will be surprised. Even Megyn Kelly said that she would only be surprised if he runs.

Most Americans are surprised that anyone takes him seriously – or that he takes himself seriously. In the Clown Car of the Republican Party, Donald Trump is riding in the trunk, but he thinks he’s driving.

And by the way, here is Trump’s campaign theme song:

9 thoughts on “Donald Trump’s Campaign Slogan: This Country Is A Hell Hole”