It is getting more difficult every day to dismiss the epidemic of gun violence that has gripped our nation. The past few weeks has seen a racist in South Carolina massacre nine churchgoers, a young Muslim in Chattanooga mow down five American soldiers, an undocumented immigrant shoot a woman strolling on a pier, and a crazed “drifter” go on a rampage in a Louisiana movie theater.

While each of these incidents were unarguably tragic, only one of them produced a fervent call to action by knee-jerk conservatives. After Kate Steinle was killed in San Francisco, the right-wing outrage machine cranked up to eleven. There were immediate allegations that the crime was wholly attributable to the city’s so-called “sanctuary city” laws and the fact that the perpetrator was an undocumented immigrant.

Pundits primed with prejudice whipped up xenophobic fury despite the fact that the crime could just as well have been committed by a native-born citizen without changing a single one of the circumstances. Politicians wasted no time in drafting bills to punish cities with progressive laws (that are favored by law enforcement), and mandating harsh sentences for repeat immigration violations.

For some reason, none of the panic stricken conservatives bellowing about the awful fate of Ms. Steinle were able to recognize the one thing that all of these incidents had in common: Someone who ought not to have had access to a gun was able to acquire one of more of them and forever destroy the lives of some innocent people. 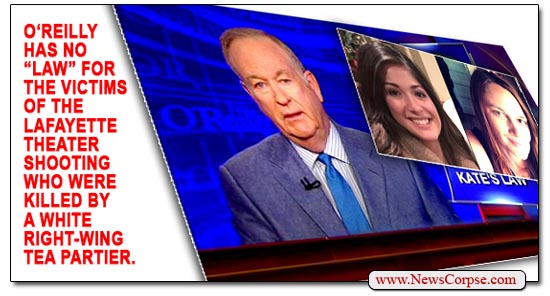 Chief among these carping cretins was, as usual, Bill O’Reilly. In a matter of hours he was pontificating on the horrors of alien invaders pillaging our defenseless womenfolk. He started an online petition to gather support for something he called “Kate’s Law” to increase the penalties for immigration violations. His entire spiel was based on the assertion that the only reason Steinle was killed was because of lax border security.

The sad truth is that people like Steinle are killed every day under similar circumstances by American citizens. But this fact is an inconvenient distraction for O’Reilly who is intent on blaming a population of immigrants, most of whom are peaceful people who are merely trying to find ways to care for their families.

However, when the perpetrator turns out to be a white, Tea Party wingnut, O’Reilly can’t seem to muster up a public response to address the situation. There are no petitions or hastily drawn up bills, or wild accusations or vein-bursting rants. In fact, Reilly doesn’t even bother to acknowledge that the Lafayette suspect, John Russel Houser, is an Obama-hating supporter of the Westboro Baptist nut cases and a card-carrying member of the Tea Party Nation. And despite his long history of offensive postings on Internet discussion sites, O’Reilly never connects the dots to associate him with the network of violent domestic terrorists.

Houser was previously denied a permit to purchase a gun and he has a history of mental illness. His ex-wife had secured a restraining order to protect her from his “extreme erratic behavior.” Nevertheless, he managed to acquire an arsenal and shoot up a theater, killing two innocent women and injuring several others. But as far as O’Reilly is concerned, it’s just too bad that he wasn’t an illegal alien from Mexico so there could be a lynching party formed to march up to the castle with torches and pitchforks.

All of the evidence shows that right-wing domestic terrorists pose a far greater threat to Americans than the much-hyped ISIS brand. Sovereign citizens, Klan groups, militias, and extremist Christianists have been responsible for many more deaths and injuries than the fabled Islamic sleeper cells. But even after Tea Party disciples of Cliven Bundy’s Nevada ranch gang murdered two Las Vegas police officers, there was no call to action by O’Reilly or his conservative colleagues.

President Obama lamented today that he was “distressed” about not having been able to do something about gun safety during his term in office. He told the BBC that…

And throughout the last seven years, as throughout the last seventy, it is the right-wing, NRA fearing, Republican Party that has stood in the way common sense solutions. As noted above, the one thing that all of the tragedies that are occurring in ever more rapid succession have in common is the use of deadly weapons that have no practical purpose other than killing human beings.

Until we solve the problem of these weapons being so easily accessible to people with hostile intentions, there will be more tragedies and more grieving survivors. And, no doubt, more pathetic excuses from grand-standers like O’Reilly who search desperately for vulnerable victims unto whom he can shift the blame.