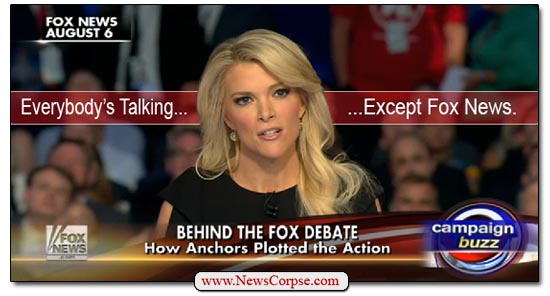 It’s now Sunday morning and Fox News has not reported on the comment once. It’s complete radio silence. This is a particularly egregious omission considering that Fox did report that Trump was uninvited to the RedState conference sponsored by notorious misogynist Erick Erickson, whose stated reason for the snub was the “blood” comment. So Fox mentioned the revoked invitation, but not the reason.

Furthermore, Trump was interviewed by phone on four of the five Sunday morning news programs. The one exception was Fox News Sunday. They declined because they insisted that the interview be in-studio. So Fox went Trumpless, while NBC’s Meet The Press hosted Trump who had previously said that “Sleep eyes @ChuckTodd is killing Meet The Press. Isn’t he pathetic? Love watching him fail!” In the MTP segment Trump defended his numerous attacks on the appearance of women by saying that “It’s very hard for them to attack me on looks, because I’m so good looking” And so delusional. Even if it were true it doesn’t excuse his reprehensible behavior.

Finally, on Fox’s media analysis program, MediaBuzz, host Howard Kurtz didn’t even discuss the “blood” comment. He played the clip from CNN then led the discussion away from it to Kelly’s debate questions. He explained that his interview with Kelly took place before Trump made the comment, however, his introduction didn’t. He opened the segment saying “I spoke with the host of The Kelly File on Friday night. This was an hour before Donald Trump made his harshest and most personal comments about her.” So Kurtz acknowledged that the remarks were harsh and personal, but never addressed them in the interview segment or the panel discussion that followed.

Addendum: Another notably absent figure is Grizzly Mama and “real” feminist, Sarah Palin. She has not said a single word on this subject. In fact, she hasn’t tweeted or posted anything on her Facebook page since the debate. Way to stand up for women, and former colleagues, Sarah.

Update via Gabriel Sherman, New York Mag: “One Fox personality told me that Fox producers gave instructions to tell in-house talent not to bring up Trump’s controversial comments that Kelly had ‘blood coming out of her wherever’ during the debate.” So this was a deliberate editorial blackout. NYMag has some other interesting items about Fox and Trump in peace talks.