With each new day it seems there is another intemperate remark flowing from the sewer that is Donald Trump’s mouth. The latest toxic spill involves Trump’s repugnant comment disparaging Fox News anchor, and debate moderator, Megyn Kelly saying that “You could see there was blood coming out of her eyes, blood coming out of her … wherever.” 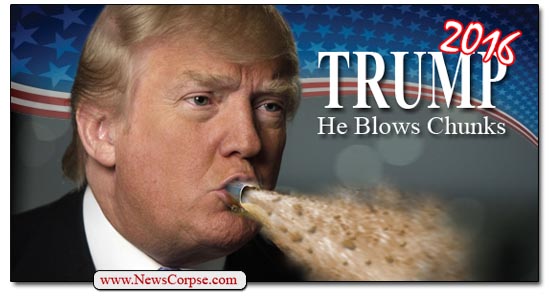 Trump’s thinly veiled suggestion that Kelly’s menstrual cycle bore responsibility for the questions she asked was both childish and sexist. And his assertion that blood was “coming out of her eyes,” or elsewhere, was not nearly as disgusting as the feculence that comes out of his mouth.

Not that Kelly is a paragon of feminist virtue. From the start of her Fox News gig she has exploited her womanly charms. As her star ascended she was interviewed by GQ magazine complete with sultry photos. And when GQ asked her why she sat behind a glass table that showed off her legs, she said that “It’s a visual business. People want to see the anchor.” Which explains why Bill O’Reilly wears those low-cut blouses. But Kelly’s willingness to market her own allure doesn’t make her fair game for neanderthals like Trump.

Up until now Trump has avoided any real consequences for his thuggery. But there have already been some serious repercussions for Trump’s latest display of rank incivility. Erick Erickson, whose RedState organization is sponsoring a conservative conference today, has uninvited Trump from the event which features several other GOP candidates. Erickson, it should be noted, is a notorious misogynist whose language frequently crosses the lines of decency. This is the same guy who called former Supreme Court Justice David Souter a “goat-f*cking child molester.” And he is offended by Trump?

There is also news that a senior Trump advisor has either resigned or been fired, depending on which slimeball you believe. Either way, Roger Stone is no longer working on Trump’s campaign. Stone is a Fox News contributor and a proud Republican dirty-trickster who founded an anti-Clinton organization called “Citizens United Not Timid,” or C.U.N.T. And he is offended by Trump?

Apparently there is a need for a more detailed guide to evaluating the bullsh*t that is such an integral part of the Trump campaign and persona. So News Corpse has put together this handy reference for confused Wingnuts, Teabaggers, and Fox News viewers:

Got it? Follow this simple guide and you can’t go wrong when sinking to the lowest depths of human behavior. It remains to be seen if Trump will suffer any long-term harm from this loathsome episode. He may just get another pass, because his noxious attitude is generally regarded as appealing in the Republican Party. They truly are, as they like to remind everyone, revolting.