This campaign season is witnessing some of the most shallow analyses of the political landscape to ever be spun by the Perpetually Erroneous Pundit Squad. The constant repetition in the media of the non-existent dominance of Donald Trump’s phony candidacy is boxing out any rational examination of the progress of the primaries. But it is all as ephemeral as a soap bubble and just as easily burst. 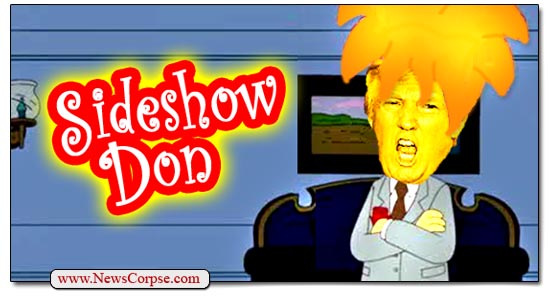 Since the Fox News GOP debate, Trump’s standing in the polls has actually declined. He is still leading the other Republican contestants, but by smaller margins. And throughout what has been characterized as a phenomenon, Trump has never garnered the support of more than a small percentage of the electorate. For the most part, Trump has held a lead with about 20-25% of just the Republican voters in the polls. What most pundits fail to notice is that that means there are 75-80% of Republicans who are not supporting him. Since when is that an expression of massive, grassroots popularity? What’s more, he has consistently had the highest unfavorables of any candidate, Republican or Democratic.

The only reason that Trump is ahead of his rivals now is that there are so many of them. The sheer quantity of non-Trump candidates disperses voters so that none of them can accumulate enough support to rise above the batshit insane constituency that Trump has managed to sew up. Once the field begins to narrow, support will migrate to the stronger candidates who have the endurance to last beyond a couple of primaries. When there are only two or three other candidates they will all be beating Trump, if he is even still in the race.

The press likes to inject explanations for Trump’s fake acclaim that generally takes the position that the American people are angry and that Trump’s barbarian persona appeals to those malcontents. However, the public is no more angry than in past election cycles that have seen the rise of protest candidates like Ross Perot and Ralph Nader and, more recently, the annoying and ignorant bitchiness of the Tea Party. And like Trump, they have all failed to ignite more than the same small contingent of kvetchers. It is the same crowd who cling to the belief that Obama is the anti-Christ.

Adding to the journalistic malpractice that characterizes the Trump coverage, is the suggestion that Bernie Sanders is the progressive version of Trump. What unadulterated bull. Trump actually is an angry, visionless loudmouth who attracts the blind devotion of the dimwitted rabble who are equally irate. Sanders, on the other hand, isn’t angry, he’s passionate. He is offering a positive agenda of detailed policy proposals on the economy, social justice, foreign affairs, the environment, Social Security, and health care. That’s the difference between Sanders, an affirmative reformer, and Trump, an opportunistic blowhard. And Sanders has also proven that he has the sort of broad-based support that Trump has never been able to muster, even after receiving millions of dollars worth of free airtime on Fox News. In recent polls Sanders is beating Trump head-to-head by twenty points.

The foregoing notwithstanding, we can expect the media to continue their pitifully hollow presentations of current events. The question is whether they are doing it because they are too lame to figure out the obvious reasons for what is unfolding, or because they are addicted to the ratings they enjoy when they play along with the hype of a celebrity candidacy. If they were honest they would just start pushing for a “Draft Kim Kardashian” movement and quit pretending that Trump’s campaign is anything different.