The lunatics on the right have embraced some pretty outlandish conspiracy theories over the years. Not the least of which is that President Obama, who supports Planned Parenthood, gay rights, gun safety regulations, separation of church and state, and equality for women, is a Kenyan-born Muslim. Based on his political platform Obama would be the worst Muslim ever. But conservatives have never let reason interfere with their dementia.

Now the Doofus Brigades in the daffy rightosphere have latched unto a new bit crackpottery with which to tingle their nether regions. Two of these “news” sources were featured on Fox Nation, the community website of Fox News. According to the Daily Caller’s Jim Treacher, there is something fishy about the meathead who asked Donald Trump about the “Muslim problem” in America. Treacher notes that “Some people are speculating that the guy was a plant.” He doesn’t bother to identify any of those speculators, but he is worried that nobody knows the questioner’s name. Nobody ever knows the names of random people asking questions at rallies, but this time it’s cause to freak out.

The intrepid pseudo-journalists over at Breitbart News went even further to declare their “Exclusive” story revealing that “The man, whom some suspect to have been a liberal or Democratic plant in Trump’s audience, was featured in a meme in the spring of 2013 that was credited to aattp.org, the website of the group Americans Against The Tea Party.” Actually, that photo dates back to a Glenn Beck 9/12 Project rally in 2009 where there were lots of guys just like this. Also aattp.org features actual Teabaggers and has no incentive to promote phonies. The real ones are bad enough. 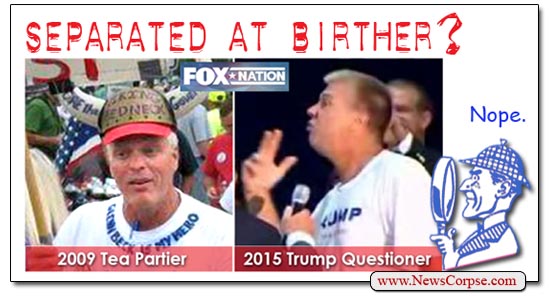 Before demonstrating the unparalleled idiocy of these cretins, let’s just point out the obvious fact that liberals don’t need to plant a moron among the Trumpsters. Most of them already believe that Obama is a Muslim who is waging a “War on Christianity.” If liberals sent trolls to Trump’s events they would just blend in with the rest of the imbeciles. Even Trump disputes that the questioner was a plant. He told the Curvy Couch Potatoes of Fox & Friends that…

Indeed, they were nodding. Because they agree with the asinine premise. As does Trump. In fact, they’re proud of it. So the entire notion that liberals would have gone to the trouble to plant someone to ask a question that most of the people in the crowd would have asked without any prodding is absurd. All they had to do was watch and wait. Trump’s supporters would expose themselves on their own in due time. [Note: Due time in this instance was the very first question]

But none of that would stop Breitbrat Patrick Howley from concocting the most preposterous plot surrounding the alleged liberal plant. Howley, a disreputable hack who has confessed to unethical and unlawful tactics to smear his ideological foes, asserts that the “plant” at the Trump affair was previously spotted at a Tea Party gathering in 2013. He even posts a link to what he says is photographic evidence of the sighting.

There are just two small problems with Howley’s hysterical hypothesis. First of all, he doesn’t provide any proof that the guy in the old Tea Party photo was a plant. If he was a legitimate Teabagger back then, he couldn’t very well be a liberal plant now..

More importantly, the two men do not share even a remote resemblance. The Teabagger is significantly older with a full head of gray hair. It is unlikely that he got younger in the years since the Tea Party rally. Also, he has a narrower face and a more pronounced chin. No one could plausibly say that these two men were the same person unless they were hopelessly predisposed to seeing only what they want to see, or they were determined to deceive others. And in furtherance of that goal, Howley wrote that “We know now that the left-wing media and activists were aware of this man more than two years before last week’s Trump rally.”

No, actually, you don’t know anything of the kind. You don’t know who the Teabagger was, you don’t know who the Trump guy was, you can’t honestly pretend that they were the same person, and even if he were a plant his question represents exactly what Trump and his followers believe. So all you’ve got left is to continue to lie and invent ridiculous scenarios for which you haven’t got a scrap of proof. In other words, you can do exactly what you always do and hope your glassy-eyed disciples don’t catch on. The rest of us are familiar with your conspiracy ravings and aren’t impressed by your poor journalistic skills and complete absence of logic. So carry on.